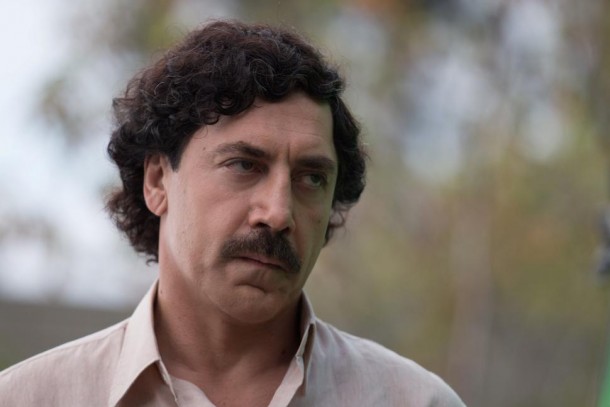 Penelope Cruz and Javier Bardem step into the limelight as the convincing kickass couple at the heart of this florid foray into the life of Colombian cocaine king Pablo Escobar, from Madridleno director Fernando Leon de Aranoa (Mondays in the Sun).

Playing out like a clunky crime caper from the 1980s Escobar is true to its era in depicting the career of the rags to mega riches drug baron who eventually burnt himself out on a hot tin roof – or so we’re led to believe in the final melodramatic moments.

Bardem’s Colombian accent is spot on and he rocks another mat-like wig (from his already extensive repertoire) and a prosthetic pot-belly that takes on a life of its own. Cruz is all glamorous in YSL couture, almost drowning under the weight of her glossy mop and gurgling on a fruity English accent. The film opens in 1993 as she’s evading Colombia on a plane: “I’ve had to leave a house to escape a man, but never a country” – or words to that effect.

As journalist Judith Restrepo, she is the voiceover filling us in on the Escobar investigations handled by American DEA agent Shepherd (a laconic Peter Sarsgaard): subsequent events show that for years she’s been playing a somewhat flirty cat-and-mouse game with Shepherd, who’s been probing her for information on her louche lover. The story then tracks back to 1981 where she meets the seedily illustrious married Escobar on his tropical estate and headquarters of the notorious Medellin Cartel. Desperate to be taken seriously as a politician -but gradually failing miserably in the endeavour – he is now lying low. Initially confident in her career, she enjoys a whirlwind courtship, but rapidly sees her reputation failing as her lover loses interest and becomes increasingly menacing: his gifts turn from diamonds to a diamante revolver – for her own protection – against him and his rivals.

Bardem creates another scary psychopath: loving to his family but threatening to his enemies, and his richly-roasted accent is brilliant in contrast to Cruz’s screechy meltdowns. Chainsaws abound and there is abundant animal cruelty in what is ultimately a mildly entertaining and well-paced chronicle of the cocaine king’s career. MT

ON RELEASE NATIONWIDE FROM 16 SEPTEMBER 2018