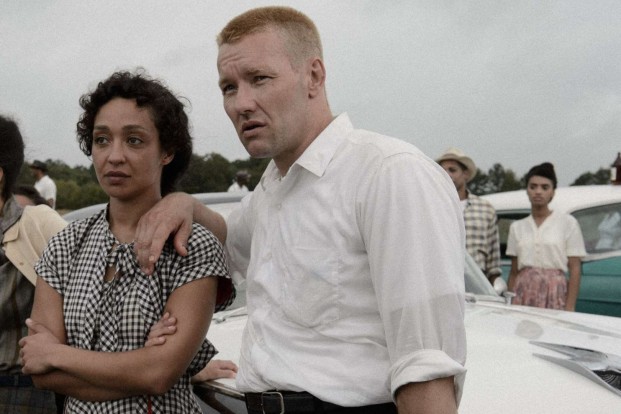 Hot on the heels of his mystery drama Midnight Special Jeff Nichols was back at Cannes Film Festival this year with a superbly crafted biopic of the interacial couple who rocked the headlines in 1950s Virginia for marrying against state laws.

Richard Perry Loving is played by a very white Joel Edgerton (his hair dyed blond) and Mildred Perry by the Irish Ethiopian actress Ruth Negga (Iona) in a classicly told linear narrative where Nichols rapidly skteches out the genesis of their early courtship, Mildred’s pregnancy and their subsequent nuptuals.  This is all, of course, against highly illegal and after spending a night in prison Mildred is bailed out by her father.

Nichols adopts a candid sombre approach to his re-telling as the couple are advised by their lawyer to leave the state for 25 years or risk further imprisonment. Images of close family and security are the keynotes in this painterly picture which makes atmospheric use of the lush surrounding scenery that glows with fifties wholesomeness and a regularly occuring leitmotif of a wheelbarrow full of cement leaves us replete with the cheesy earthyness of their worthy plight.  Many may muse over the perceived awfulness of having to move with your loved up spouse and growing pregnancy to a reasonable flat  in DC. But the fact remains that they are fighting a cause that feels unjust and inhuman.

Set against the backdrop of the American Civil Rights movement, the couple’s love story plays out as a convincing one – Edgerton plays Perry as mildly pugnacious and insular, Mildred the more visonary of the two, is a subtle turn for Negga which she plays with sunny dignity. A couple of clever young Jewish lawyers work hard for them ‘pro bono’ taking the case to the supreme court through thick and thin. Although the stakes are high, Nichols never gives an impression that they are villified or pressurised in any way as they move to a picturesque wooden house in the middle of wheat fields with their three growing children and Mildred plays the (outwardly) contented housewife. A little more strife and an undercurrent of pain and desperation would have served the story better as the course of justice is portrayed as pretty much of a breeze from start to finish -which clearly it was not – leaving little tension or moving moments in a drama totally devoid of any drama. A worthy and important biopic that fails to make us feel the couple’s undeniable pain. MT