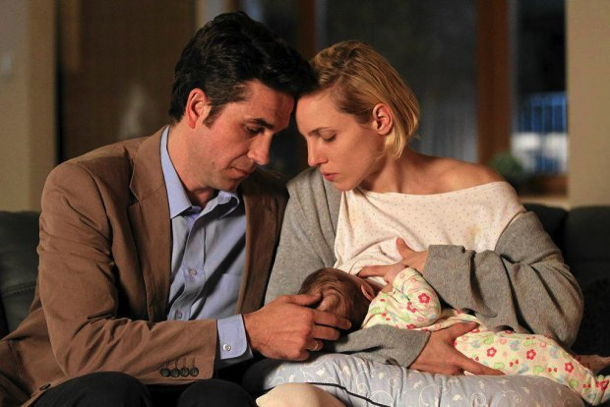 Truth is often stranger than fiction and although the premise of this intimate Polish drama based on real life events in the city of Olszytn appears bizarre, when you think of a certain Mayor’s track record, it could easily happen.

Slowomir Fabicki’s drama is saved by moving and convincing performances from leads Julia Kijowska and Marcin Dorocinski who play Maria and Tomek, a successful working couple expecting their first child.  Maria works in the local council, Tomek is an architect with a practice specialising in Civic work and reliant on Government building contracts. Maria’s boss, the Mayor (Adam Woronowicz) is driving her mad with inappropriate emails and texts messages and when the couple attend an evening function at the Town Hall, the Mayor asks her for the last dance and it doesn’t end there.  Although our working laws and easy access to industrial tribunals make this drama feel implausible to UK audiences, Poland is not so advanced in these matters and women are still very much dominated by men in the workplace. Maria is also mindful of the ongoing building contracts that her husband’s practice is tendering for. All this could be jeopardised if she makes a complaint although she is clearly irritated by her Boss’s advances. But Tomek laughs the whole thing off appearing flattered that his heavily pregnant wife could be attractive to another man.  Soon it becomes clear that this is no laughing matter.

What happens next could easily descend into farce but the clever pacing and elegant cinematography elevate this potentially sordid story into something much for meaningful.  Loving is a simple tale, well-told and touchingly performed. MT