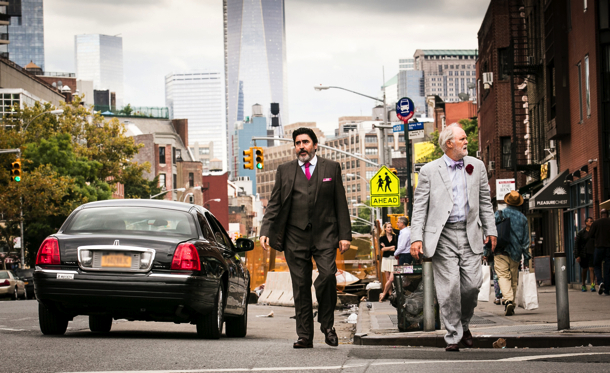 Ira Sach’s previous feature Keep the Lights On was an exploration of gay love seen from the perspective of a young man in a troubled relationship. Fraught with despair and conflict it was a difficult film to watch. Here is something more gentle and kind about a couple who have been together for nearly forty years are appear to have found true love and contentment together.

Ben (John Lithgow) and George (Alfred Molina) finally decide to formalise their relationship but scarcely have the champagne glasses been put away than outside influences put a strain on their their early days of marriage. George is fired from his job at the local church because his new status is not considered acceptable there. During an odd interlude with their their close family and neighbours the pair fail to raise enough capital to pay their bills so while selling their place and searching for new accommodation Ben moves in with his nephew Elliott (Darren E. Burrows), his wife Kate (Marisa Tomei) and their teenage son, Joey (Charlie Tahan). George manages to find a room with some neighbours.

Forced apart, their relationship comes under strain and this is where Love Is Strange gradually becomes unconvincing. For a start, it seems implausible that this affluent-looking and established couple in their sixties/seventies would prey upon their younger family for help with accommodation and then agree to living apart in a rather bogus set-up. Once Ben is established at his nephew’s place he becomes unbearably self-centred and particularly irritating in his insensitivity towards Kate; seemingly unable to understand how their family functions and lacking any graciousness in his status as a guest. Yet when he meets up with George in the evenings, he behaves in quite a different way: as a normally-adjusted and sympathetic adult. As a result we feel little for this rather spoilt old man whose only focus is to paint on the roof of his nephew’s apartment block in the afternoons. As George, Alfred Molina shines as the more mellow and appealing character of the couple. The fact that they are gay is incidental here as Sachs’s narrative focuses on love, coupledom and the nuclear and wider family dynamics. Whether Sachs is simply telling a story or whether he is trying to probe and explore the differences between the intimate love of two people (essentially coupledom ) and the love of a couple and their inherent responsibility to their kids and extended family network and community is unclear. However, the result is that we feel nothing for Ben and George as they simper over their cocktails but every sympathy for Kate and Elliott, who are holding their union together with the additional stress of kids, while trying to be supportive to their rather cantankerous uncle.

Make of it what you will. Ira Sachs and co-writer Mauricio Zacharias craft some interesting characters in this slim but engaging drama which has some wistfully dreamy moments (such as those when Ben is painting over the New York skyline) that allow space to drift and imagine the strangeness of love, responsibility and human dynamics to an appealing piano score. MT

ON GENERAL RELEASE FROM 13 FEBRUARY 2015