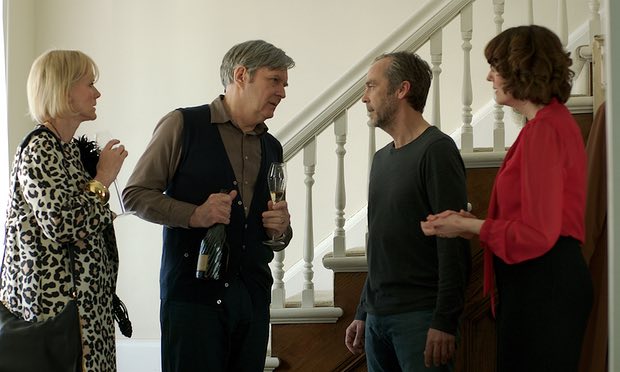 Writer/director Joan Carr-Wiggin (Happily ever After) has come up with a rather awkward narrative: after being told that she might only have five days to live, the heroine is forced to spend the remaining 120 hours in a déclassé rom-com with a cheating husband and an immature ex – not to mention two empty-headed daughters, who rush to find their life partners before Mum leaves this world.

Grace (Chancellor) is an architect in Toronto. Told by her doctor that her brain tumour might be inoperable, she reacts with stoicism. Not so her family: husband Tom (Fleet) cries non-stop and goes on drinking, feeling more sorry for himself than his wife. Enter Richard (Hannah, a popular author) and Grace’s ex-husband and father of their daughter Zoe (Boland). Richard suddenly realises that Grace is the love of his life, even though he left her for Tamara (Norris), who also lives in Grace’s family house.

Meanwhile, Tom goes on drinking – and sleeps with Tamara, who wants to prove that Tom is non-deserving of Grace’s love, Richard makes a play for Grace, who is already overwhelmed by the chaos of what may be her final hours. Daughter Kaitlyn (Anderson), whom Grace suspected to be a lesbian, suddenly finds “the right man”. But it turns out, that he is married, and (in one of the most embarrassing scenes) is cornered at his front door with his wife by Richard and Kaitlyn. When Richard finally gets Grace on her own for a restaurant tête à tête, a bizarre turn of events scuppers the whole affair.

You really have to feel sorry for the cast, trying their best to hold this all together without cringing. DoP Bruce Worrall, who shot the director’s previous outing: If I were You, cannot really save the day: nearly all the ‘action’ takes place in the studio, giving the feeling of filmed theatre: doors open, and people enter, speaking/shouting their lines and exit. Truly a missed opportunity to create a funny and intelligent comedy drama. AS

AT SELECTED VENUES FROM 17 FEBRUARY 2017