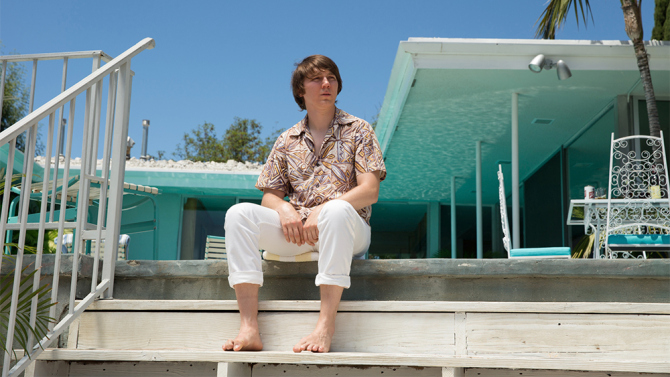 LOVE & MERCY explores the life of iconic Beach Boys front man Brian Wilson during the formative years of the band and the abusive relationship with his father that led to mental illness that worsened under the control of a doctor whose care he sought in his troubled adult years.

In a resonant and well-managed double act Paul Dano (young Brian) and John Cusack (older Brian) evoke the creative brilliance of an intuitive soul caught between the strong egos of his father and the other band members while he strove to channel his musical talents into a string of highly original hits capturing the upbeat sunny vibe of America in the sixties while echoing the tender tones of love and loss.

Oren Moverman’s fractured narrative flips back and forth from the opening scenes as John Cusack’s quirky and quixotic older Brian is buying a cadillac from Melinda Ledbetter (a superb Elizabeth Banks), who is to play a crucial part in his adult years – and the early life portrayed by Paul Dano’s sensitive young Brian who is physically and mentally abused by his unhappy father, as he patiently feels his way ahead on a thrilling musical adventure. Although occasionally slack in places where the film attempts to drift into the dreamlike mindset of a creative genius or reflect the gruelling nature of recording sessions, this affecting emotional drama sings out with spine-tingling soul.

In some ways Bill Pohlad’s direction has tragic overtones of a man who succeeded against the odds. Wilson is seen as being constantly besieged by negative characters, amongst them his father, Murry Wilson (Bill Camp) who will eventually sell the rights to the Band’s music for less than a million dollars; bandmate and naysayer Mike Love (Jake Abel), not to mention the vehemently vicious Doctor Eugene Landy (a brilliantly ebullient Paul Giamatti), his disturbed legal guardian, who uses a toxic brew of Pavlovian tricks to keep Wilson psychologically under control. But glimmers of hope gradually transform the drama in the final scenes – and if you don’t know the story, this will come as a welcome surprise.

In the early years, a puppy-like Paul Dano paints Wilson as a home-loving peacemaker who relies heavily of intuition to be productive and uses accomplished professional musicians known as the Wrecking Crew to create the unique sound of mega hits ‘God Only Knows’ and ‘Good Vibrations’. In one scene, we see him cancelling a $5000 dollars recording session simply because “the vibes don’t feel right”. Drummer Hal Blaine offers Wilson the only professional praise in the entire piece, assuring him: “Phil Spector’s got nothin’ on you”.  This is a heart-warming moment in contrast to the many scenes of flagrant emotional abuse that Wilson suffers at the hands of Dr Landy and his father who continually puts him down: “Five years from now no one is going to remember you or the Beach Boys.”

John Cusack reflects Wilson’s inate good-nature but also his warped and tortured soul in the desperate lines “I want you to leave now, but I don’t want you to leave me”, after spending a romantic afternoon with Melinda in his beach-house. Their relationship develops under the constant control of Dr Landy, who insists on over-medicating Wilson, being a permanent presence in his daily acitivities and even dictating his living arrangements and attending his dates with Melinda. And as the couple gradually fall in love, the defensive Landy insists that Wilson wants no more of Melinda in his life due to his recording commitments.

Pohlad’s biopic is by no means hagiographic and this is the essence of its success as it accurately reflects the real nature of an intensely private man whose creativity strove to express deep-felt emotions and continual inventiveness and rather than a desire to engage with fans and pursue fame. And this is perhaps, in some ways, why Wilson was at odds with his bandmates. But even if you know nothing of the man himself but are familiar with the legend of the Beach Boys and their songs, this is moving musical biopic with appeal for the arthouse crowd and mainstream audiences alike. MT