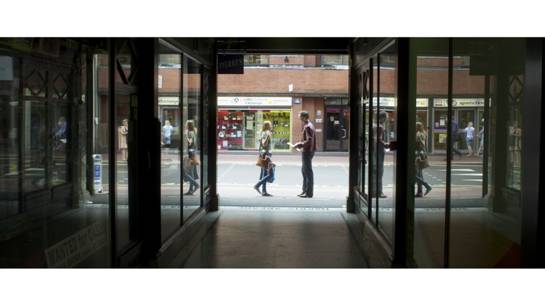 LOVE ME TILL MONDAY is very much like its lead Becky (Georgia Maguire): spirited, a little vague, not very focused but immensely likeable. Whilst all this is fine for Becky/Maguire, the floppy, episodic narrative and the lack of direction (never mind conclusion of anything) is often grating.

The film is set – refreshingly – in Reading, this British comedy is all about about growing up and knowing what you really want: unfortunately, twenty five year old Becky (Georgia Maguire in a very spirited debut) doesn’t really want the former and has no clue about the latter. She works in a dead-end office job, but her mind is mostly somewhere else. Because Becky is not alone in this limbo situation: everyone in the office (bar Steve) wants a good time, but seems not to care very much about the future – again the after-university symptom of lack of adjustment. This can be sweet – up to point, but when none of the protagonists seems to learn anything from their mistakes, one looses a little interest.

After her Mum dumps her younger brother Ollie on her, she lovingly neglects him. Becky has never adjusted to life after university, and she really just wants to be taken care of. Her first choice is ‘HIM’ (Pierreson), the office hunk. But because Becky hesitates, one of her co-workers  picks him up – but not for long. Next in line is Steve (Plester), the much older office manager. He seems to fit the role of ‘boyfriend’, not only does he show Becky the finer points of life, he also helps looking after Ollie, introducing him to a museum and interesting him in the Battle of Hastings scenario. Becky seems to be overwhelmed, but when Steve does not want the office to know about their relationship, she bolts – straight back to HIM, but the one-night stand is unsatisfactory and HIM wants ‘time out’ from all relationships. Becky has a small nervous breakdown, asks Mum to come back and packs up: the last we see her of her is in the bus, eying the next man of her choice…

The tiny budget does not allow for much, but the aesthetics have not suffered: the acting is fresh and lively, the camera changes between loving close-ups and pleasant panorama shots of Reading, and the atmosphere created is one of bliss, with the occasional regrettable over the-top comedy elements. What is lacking is a structured script, which money can’t buy. Without it, LOVE ME TILL MONEY is just a small, fluffy film, carried (just) by Maguire’s Becky. AS