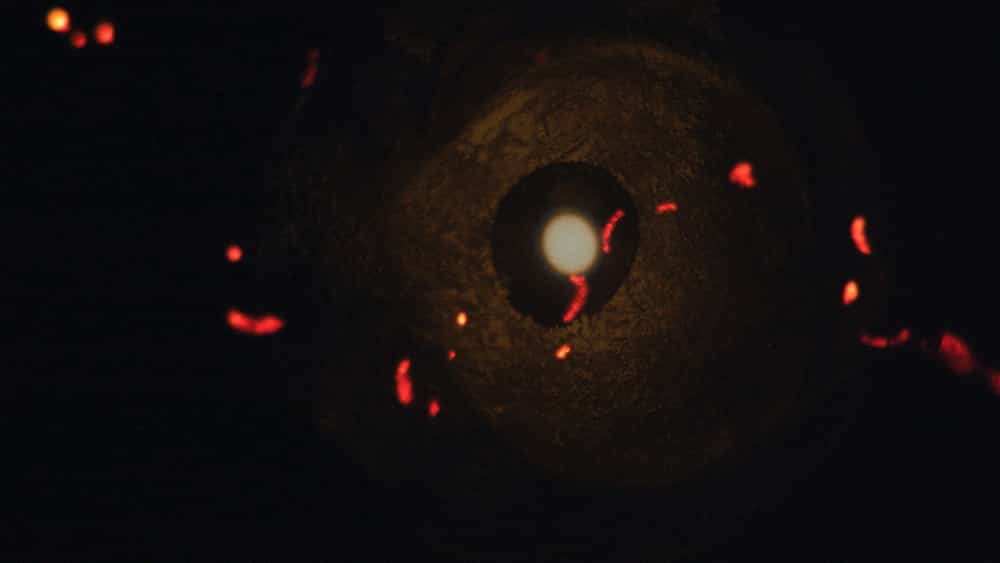 Portuguese directors  Acacio de Almeida and Marie Carré expand their short but poignant essay on light and film into a full length feature, a poetic love letter to Portuguese cinema and romance with spectacular sequences of space.

A VoiceOver by camera man Oscar (Cruz) explains: “The main link is between all forms of light, but particularly the film camera”. Light illuminates the central character in every film. “The face of an actor is also a luminous point, full of emotions and feelings”. Bruno Ganz, Ornella Muti, Joaquim de Almeida and Marie Trintignant have all been illuminated for eternity. But, there are dangers too: Silver nitrate can ignite and obliterate everything in voracious flames.

Cinema is also a kind of jail, images are captured and locked down for eternity. It bears testament to the class struggle down the ages with archive footage of demonstrations in Oporto, during the 1974 Portuguese revolution. In a filmic obituary of Maria Cabal (1941-2017), the Anna Karina of Portuguese cinema, we see her in a dressing room, looking into a mirror, alongside excerpts of her films – a young ingénue and an old woman.

Oscar asks: what could light be if it does not reflect us? He also muses on the stars leaving messages of their death. Maria Cabal, in one of her most famous roles as Illda, reflected “The objects in film are imprisoned images. Films and settings belong to each for ever, places undergo transformations, the time of a film is a moment frozen in eternity, it will never exist again but remain in the memory for those who shared the experience”. Cabal appears again, as Illda, with Oscar observing: “We are composed of light, are an intrinsic piece of light.

The ending is rather grim: a piece of celluloid is held against a candle, Oscar talks about how “Man has invented light, which can destroy the whole planet in seconds. Light gives light, but also kills life.” All this in stark contrast to a long rural love scene where the man licks the breasts of his lover with milk just milked from a lamb.

Imaginative and always full of surprises, Love-Lights is a delight that never outstays its 60 odd minute welcome as a concise compendium of Portuguese cinema, with excerpts from films by Botellho, Villaverde, Gil, Monteiro and Paula Rocha among others. A worthwhile experience. AS