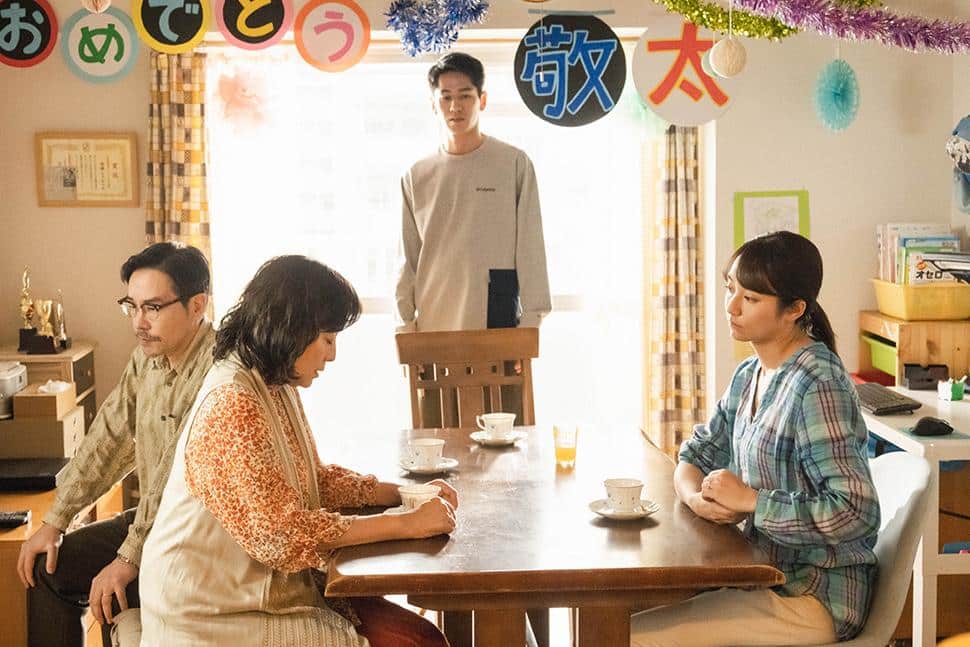 In his latest film, competing for the Golden Lion at this year’s Venice Film Festival, Japanese writer/director Koji Fukada gently explores grief and the alienating sadness felt by a couple mourning the death of their only child. And how close family can often be the real enemy hiding behind a duplicitous facade.

Taeko (Kimura) and Jiro (Nagayama) are a public spirited couple in their early thirties, looking after the city’s homeless in the social services department of the local council. The mild mannered Taeko will take the brunt of considerable male hostility throughout the drama – none of it deserved. Taeko’s son Keita (Shimada) from an earlier marriage, has joined the family unit and they all get on like a house on fire, spending their evenings playing the board game ‘Othello’ – Keita is a dab hand.

But Jiro’s traditional father Makota (Taguchi) cannot come to terms with his son marrying a woman with a child from a previous relationship, and during the celebrations for his 65th birthday his wife (Kanno) has to get him to apologise to Taeko for an unwarranted outburst. But the party soon ends in tragedy of a different kind when Keita has a fatal accident.

Soon after her son’s death, Taeko’s first husband Park (Sunada), who is deaf and communicates in sign language, come under her care as a homeless person. At Keita’s funeral, he hits out at Taeko who refuses to take umbrage even though Park left when  Keita had only just been born. Park borrows money from Taeko claiming he has to visit his dying father in Korea. This is just one of many lies he will tell during the course of the drama: the real reason he is going is to attend the wedding of his oldest son,  whom he had abandoned twenty years ago.

Fukado has the courage to cast the speech-impaired Park as the real villain of the piece – suffering severe physical challenges does not necessarily make him a good person. Taeko is also a rather ambivalent character – using Park to serve her own needs. And although Jiro seems like a good guy he has never adopted his stepson officially, without giving a reason for it. Old Makota lives in the past, his traditional values clashing with modern Japan. And his wife only defends Taeko because she wants to see her grand children growing up. Immediately after the accident, she will beat a hasty retreat to the countryside with her husband. Jiro’s ex partner confesses how heartlessly she behaved towards a lover whom she dumped. In this group of ordinary people, their true selves coming to the surface caused by the death of a child. Will they take the opportunity to redress their lives, choosing honesty instead of obfuscation to come to terms with themselves?

Filmed on long-tracking shots and in intimate close-ups DoP Hideo Yamamooto, this is a spare and subtle domestic drama in the style of Ozu and Toyada. Performance-wise Fumino Kimura is particularly convincing as woman who needs weaker characters to make her feel more confident. An sensitive film that speaks volumes about social motivation. AS