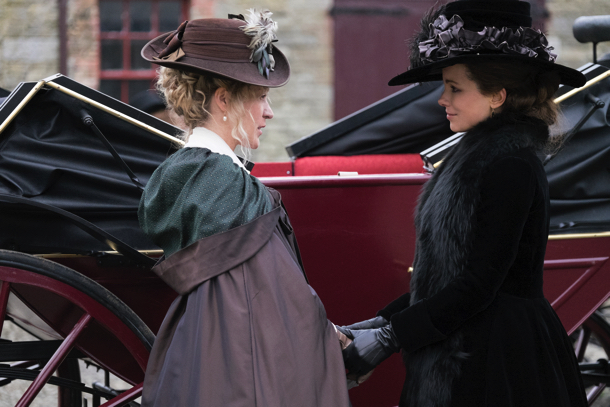 And this is no staid period drama but a spritely, often hilarious, comedy of manners that follows the newly widowed machiavellian adventurist, Lady Susan Vernon, through a risqué game of shrewd social ritual to redemption in the arms of a malleable replacement suitor. With his well-known comedies Last Days of Disco and Metropolitan, Stillman has proved to be a dab hand at distilling delicious drama from urbane society. And Kate Beckinsale is at her best yet, back in a literary role that she handles with delicious aplomb (occasionally echoing the TV mannerisms of Nigella Lawson) and hopefully ushering in a return to a genre she does best.

The story opens with Lady Susan on the verge of leaving the household of “a divinely attractive” but irritatingly married Lord Manwaring, introduced by caption but ever to remain silent on screen,  glowering with lustful intent in a walk-on part. In order to clear the path for her indiscretions in the homes of suitable friends and connections, Susan has despatched her daughter Frederica (Morfydd Clark) to finishing school in London, while she plots her next incursion into her late husband’s family, alighting on the coltish charms of a young in-law, Reginald DeCourcy (Xavier Samuel).

Her partner in crime in these adventures is one Alicia Johnson (a discreet Chloe Sevigny, her sidekick from Last Days) who is married to Stephen Fry’s staid statesman who is, inconveniently, also the guardian of Lord Manwaring’s wittering wife Lady Lucy (Jenn Murray).

The enjoyable thing about LOVE & FRIENDSHIP is that it leaves you wanting more of its delightful wit and charm. From the main performances to the small cameos – particularly that of Tom Bennett as the hilarious Sir James Martin, in the jaunty style of a dumbed-down Robert Peston. Lady Susan is the ultimate ‘mistress of the put-down’ who cunningly moves between Xavier Samuel’s tousled toyboy DeCourcy and the subtle stability of Sir James with the consummate skill of Molière’s Célimène or Choderlos de Laclos’ Marquise de Merteuil – with lines like “Facts are horrid things” showing that she is woman who won’t ever countenance defeat in this tightly-plotted marvel and wittiest drama of the year – so far. MT