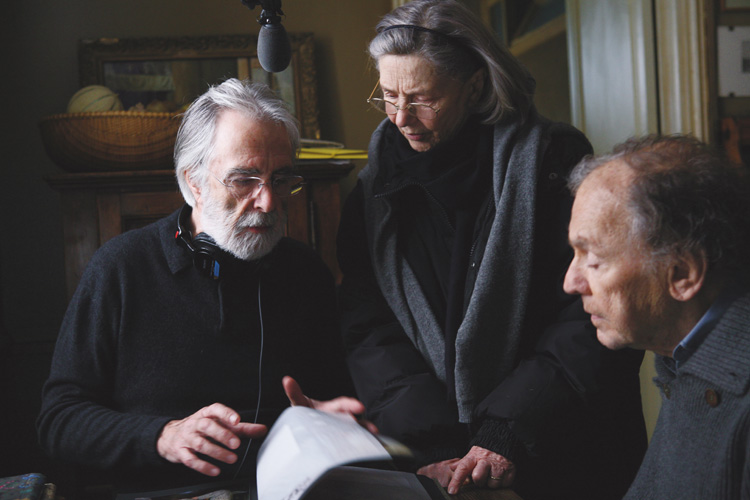 How many films deal with mature love as elegantly as Michael Haneke’s latest outing? Here he gives us a thoughtful and profoundly graceful study of a happily married couple in their eighties.  Blissful in their long-standing relationship and living independently in an elegant apartment in the heart of Paris, Anne and Georges are professional musicians.  The intimacy of their closeness is quiet and understated and their everyday conversation is cordial, respectful and refreshingly free from tension or any kind of discord.  Refreshingly also, they are not overly engaged in the life of their grown-up daughter Eva, well played by Isabelle Huppert, and her English husband Geoff, who do not appear as content in their relationship and live abroad.

Jean Louis’s Trintignant’s mature performance as Georges and his muted expression of concern and fear mingled with gentle love for the woman of his life is a joy to behold.   Moving with ease and confidence in the role of an accomplished gentleman in his twilight years he exudes loyalty and integrity.   When Anne (Emmanuelle Riva) has a stroke he is composed and understanding and this demeanour continues until her life gradually fades. The only anger he displays is short-lived and borne out of frustration with her paralysis.  It’s a restrained turn but a satisfying one dealing with the domestic drudgery of life with elegance and discretion.  The only tearful, raw emotion comes from Isabelle Huppert’s character crying for the bereavement of her own marriage as much as for the impending loss of her mother. 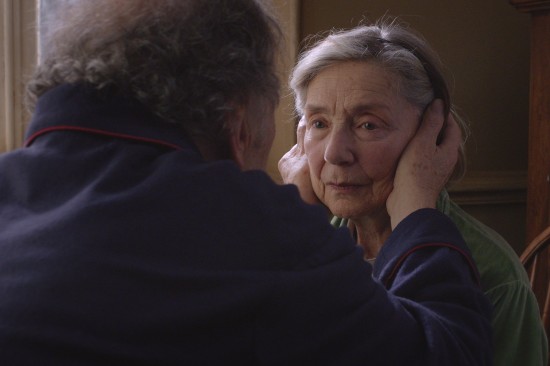 touch of pure brilliance when a dove flies into the apartment on two occasions, possibly signifying a soul set free, as often happens.  On the second visit Georges captures and cuddles it in an imaginative flourish that signifies gentleness as much as a need to express the physical affection that was maybe intended for his wife in her final days but somehow seemed to be submerged by the demands of caring for her less appealing physical needs.  This is an assured piece of filmmaking from an auteur at the peak of his creative genius.