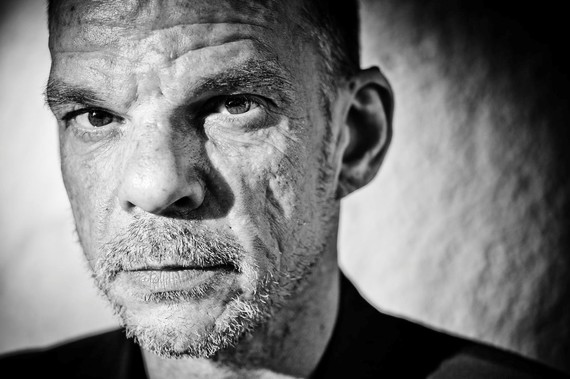 Director/writer Emmanuel Bourdieu (Intrusions) is best known outside France for his work as scriptwriter for Arnaud Desplechin (Esther Kahn, My Sex Life, or how I got into an Argument). With Céline, he steps out of the shadow of his famous compatriot, painting an honest portrait of the giant of French literature – who was so viciously anti-Semitic that the Germans avoided publishing most of his violent rants, during the occupation in Vichy France, because they deemed the extremism as counter-productive.

The title promises a bio-pic, but Bourdieu tackles just a few months in the life of the disgraced writer and physician: during his exile in the Danish town of Korsor in 1948, Céline is visited by the American scholar Milton Hindus (1916-1988), who happened to be Jewish, but was so star struck by Céline’s pre-war writings (Journey to the End of the Night and Death on Credit) that he is entrusted with the author’s world-wide rehabilitation, to allow him a return to France. Céline (Lavant) and his wife Lucette (Pailhas), living in a small cottage in the woods, eagerly await Hindus’ (Desmeules) arrival – whilst both are very much aware of Celine Anti-Semitism, they both hope he might be their ticket back to France – because he is Jewish. At first, Hindus walks voluntarily into the trap set for him by the devious couple: Lucette fawns over him, whilst the author supresses his contempt for Hindus, whom he just sees as a useful dilettante. Hindus has just come to talk literature, but Céline is only interested in discussing how Hindus can help him to persuade the French Government to allow the collaborator’s return. Slowly it dawns on Hindus that he is merely a pawn, and when he learns that a Danish doctor did not find the steel-plate in Céine’s skull, which the author claimed was a result of a wound from WWI, he withdraws slowly. During a drunken night spent by the trio outdoors, Céline and his wife lose their self-control under the influence of alcohol.

Bourdieu shows Céline not as a mad genius, but a rather small-minded little man who has to be right at all costs, offending others at will, unable to take any criticism himself. He is a wild little bourgeois, who happened to have talent as a writer. Céline is scheming, but when his patience snaps, he is only too proud to admit to his fascist beliefs: “Aryan culture came to an end at the battle of Stalingrad”. At the same time, Céline and other ‘intellectuals’ in Europe were not taken in by Hitler; whom they despised but used the power the Nazis gave them to persecute Jews. As for Hindus, on whose book The Crippled Giant, the film is based, his rude awakening helped him to value his Jewish identity for the first time in his life. Céline and his wife, alas, returned to France in 1951 after being pardoned, where the auhor went on writing and espousing his unrelenting racism.

DoP Marie Spencer skillfully conveys this prison-like atmosphere of Céline’s Danish exile: at night the musty brown Autumnal shadows see him again and again grabbing a pitch fork to defend himself against imagined intruders. Suicidal, Lucette is forced to take his revolver away as the two engage in a morbid web of deceit from which Hindus has to de-entangle himself. The only real light occurs at the end of the film, when Hindus is sitting in a bus to Copenhagen, fleeing the malign influence of his manipulators. Lavant and Pailhas are brilliant, but Desmeules is not given much identity, his Hindus seems too reserved to be a match for Céline. Far from being a story from yesterday, Céline asks the audience to re-examine questions about art and politics, and the role of the author in society as a whole. AS

SCREENING DURING THE UK JEWISH FESTIVAL NATIONWIDE UNTIL