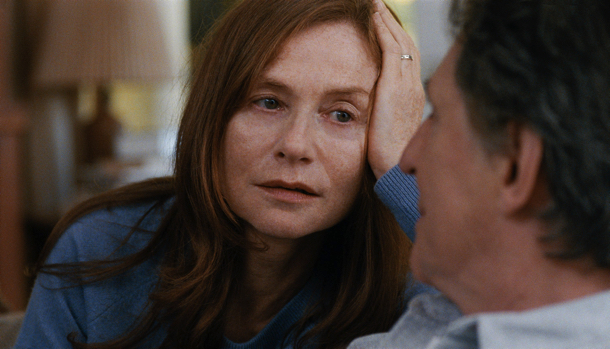 Anyone who has experienced a sudden and controversial family death will identify with the father and two sons in LOUDER THAN BOMBS, a drama exploring bereavement.

The Norwegian director is known for his previous character-driven dramas Reprise and Oslo and August 31st but this is his first film in English, with regular scripter, Eskil Vogt (Blind). He subtly explores the aftermath of the death of a dedicated photographer Isabelle Reed (Huppert), who has spent her career in war zones, shuttling back and forward on the brink of danger. Huppert brings a loving yet detached feel to her part as mother and wife. Clearly though there were cracks in the marital facade before she died, and Gabriel Byrne, as her placid and appreciative widower, Gene, picks these up with tearful concern and he grapples with a trucculent teenager and an academic son, who is out of his depth emotionally with the recent birth of his first child.

This story unravels slowly as Trier gradually fleshes out characters who genuinely feel like people you feel you know. It emerges that Gene gave up his career to support the boys before the tragedy and is now sensitively treading his way through a minefield of feelings as events continually surface to challenge his perceptions of this constantly shirting emotional scenery. Byrne plays him as an appealing, gentle man. Clearly lonely, he is at odds with both his sons and yet desperately tries to reach out in to both of them, while he also tries to find his way into a new relationship with a woman who happens to be his son’s teacher. Although Trier uses some images and techniques to explore the bereavement reveries of his characters, these feel unnecessary and out of place, as he has already proved that he can craft imaginative and authentic types who hold our attention, without resorting to gimmicks.

Huppert’s character threads through the fractured narrative, appearing as dedicated, yet also opportunistic in her need for emotional fulfillment during her overseas career. She also appears ignorant of the effects that her professional life has had on the rest of her family while she has been away, as her focus has been self-absorbed by her need to carve out her own professional niche, very much in common with the character Juliet Binoche played in Haneke’s recent outing A Thousand Times Good Night.

The story turns on the suspenseful news that her ex-colleague Richard Weissman (David Strathairn), is writing a piece in the local paper in tribute to her life, to coincide with a posthumous retrospective of her photos. He has warned Gene (Gabriel Byrne), that the piece is likely to reveal some personal details of their trips together and this causes Gene to reflect on his marriage and put his sulky teenage son, Conrad (Devin Druid) in the picture. As the older son, Jesse Eisenberg, plays his usual neurotic role as Johan, who is academically gifted yet emotionally much less mature that we first imagine. Although there are clearly some misjudged moments, this is an absorbing and at times affecting piece that shows the Norwegian director gradually developing his craft in promising ways. MT