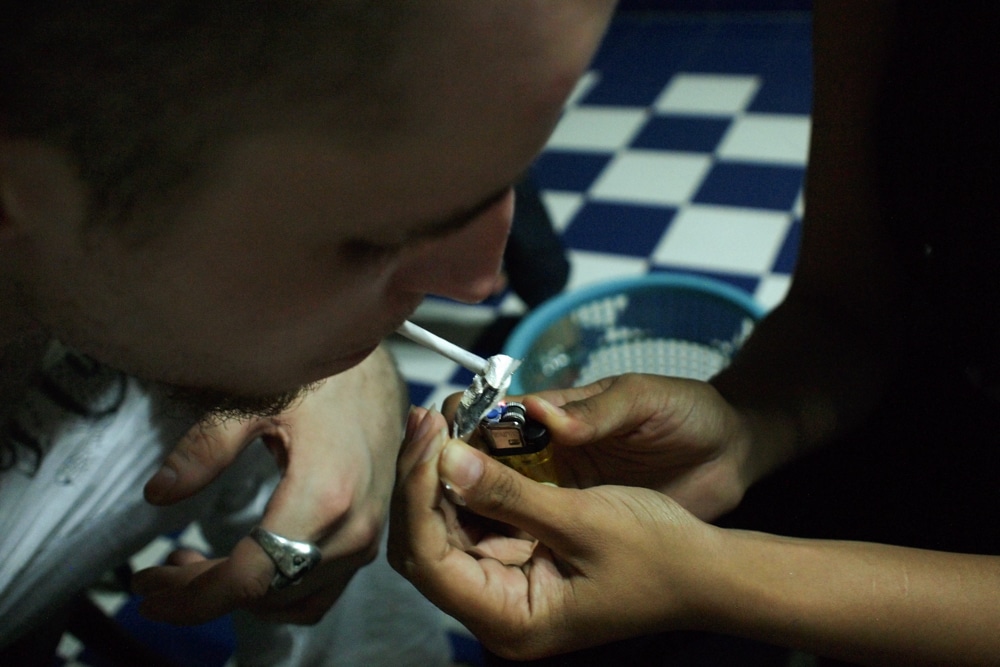 It all started with Reindeerspotting-Escape from Santaland back in 2010. Its Finnish director Joonas Neuvonen turned out to be a drug dealer from a middle class background, and this fuelled the storyline for Lost Boys, a drug-powered tour of Thailand and Cambodia to celebrate the film’s success. Joining him were petty thief and addict Jani Raappana, and his mate Annti. Reindeerspotting co-writer Sadri Cetinkaya co-wrote the script.

Three months later Jani would be found dead in Phnom Penh. How he met his fate is still uncertain. Indications are he was murdered. Pekka Strang narrates, as the voice of Neuvonen, commenting from his cell. The trio were heavy users of ‘ya ba’, formerly known as yama, a potent mixture of methamphetamine and caffeine, also used as a horse drug, and favoured by soldiers, taxi drivers and sex workers.

Lost Boys chronicles their down-spiralling nightmare into Hell, a modern day, sordid version of Joseph Conrad’s Heart of Darkness. The drug culture inevitably leads to debt, organised crime holds sway with death squads enforcing control. Sex workers are all part of the picture, the exploited leading their clients into the hands of the drug lords. Cambodia’s turbulent past has contributed to the country’s post traumatic stress disorder that started with colonisation and culminated with the Khmer Rouge. Sex tourism involving adults and children is now rampant throughout Cambodia. The country’s horrific history – past and present – plays out in a gruesome montage to the strains of La Marseillaise, as colonialism meets today’s sex tourism.

Neuvonen maintains his sole interest is in saving Annti and finding Jani’s murderer, but at the same he seems ambivalent about his mate, coming clean about the anti-hero of his first film: “I wanted him to vanish. I wanted him to die”. But will he be the only survivor of this trip to Hell?

Meanwhile Jani’s girlfriend Lee Lee and her friend Thi are compliant vessels for the sins of others and Annti is the victim of paranoid psychosis believing the nearby radio masts are there to stalk his thoughts and send the messages to a company called “Sky”.

What makes this quasi detective story so compelling is the way we’re led by its unreliable narrator in a non-linear narrative full of elliptical deceits imbued with hallucinatory visuals from dizzying handheld cameras. More than just a story, Lost Boys captures a state of mind – lies coalesce to cause the downfall of all three men whose paradise of sex and drugs leads them into a maze of death. Colour grading and editing sustain the scratchy edges of the documentary that floats in a woozy soundscape, leading us on a fractious journey as the men drift into a harrowing cul-de-sac. Lost Boys is a visual poem of the cruellest most nihilistic kind.