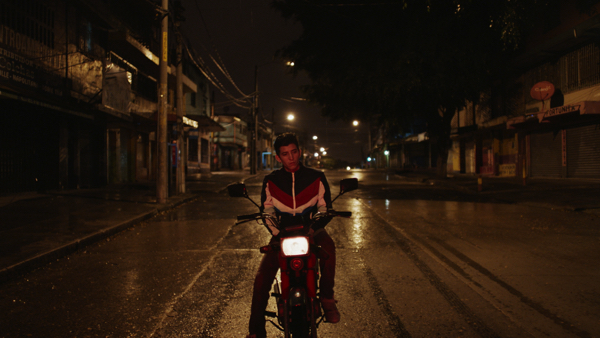 Lojo brings a distinct retro look to his impressively filmic feature debut that follows Koki, a charismatic young man making a living as a petty criminal in the hilly backwaters of Guatemala City.

Under the glowering skies of this impoverished capital, Koki and his mates are forced into a nether world of  deceit and violence; the banal, repetitive realities of working class life adding a facade of normality to their grim existence. Grifting is a fact of life not just a lifestyle choice for these troubled individuals, it is a necessity. In crafting his antiheroes, Lojo is clearly influenced by Arturo Ripstein’s Bleak Street but this is a much darker less stylised affair that seethes with subdued discontent, the soulful female characters remaining firmly in the background, weak and undeveloped, merely there to serve their men.

Koki’s sultry afternoons give way to intense nighttime forays as he plies his trade, ducking and diving in bars and shady nightclubs. He befriends gringos (tourists) who are suddenly and suspiciously mugged. After dark, he seduces male strangers, leading them to an hotel room where they are robbed by his older associate Carlos (real life wrestler Carlos, El Punisher), a middle aged, senior member of staff at the hotel. Lojo often pictures Koki glaring straight into the camera, giving this cool urban thriller a complicit fourth wall. And like the figures in Edward Hopper paintings, there are others just like Koki; anonymous men who sit alone and morose in penumbral shadows, their intense gaze searing out of the semi-darkness, challenging our preconceptions about their motives with steely resignation. Away from the daily grind of his claustrophobic workplace, the white-shirted Carlos has another string to his bow, moonlighting as a wrestler, disguised under a thick mask of make-up. But retribution eventually catches up with Koki. And when the tables are turned, and when it does her finds himself pushed even further down the food chain, forced to witness the violent effects of his own actions from an almost disembodied perspective.

Lojo works makes great use of a minimal budget in a country without much infrastructure or film expertise creating a palpable snapshot of modern Guatamala with authentic settings and convincing local characters. This is a slim but captivating mood piece that keeps its distance throughout its modest running time. The ambiguous characters and minimal dialogue keeps the tension taut but strangely leave us alienated and unmoved. Los Fantasmas always remains a mystery, never really catching fire, sizzling in its night-bound neon aesthetic before fizzling out, its cypher-like antihero reaching a nebulous nadir.  MT