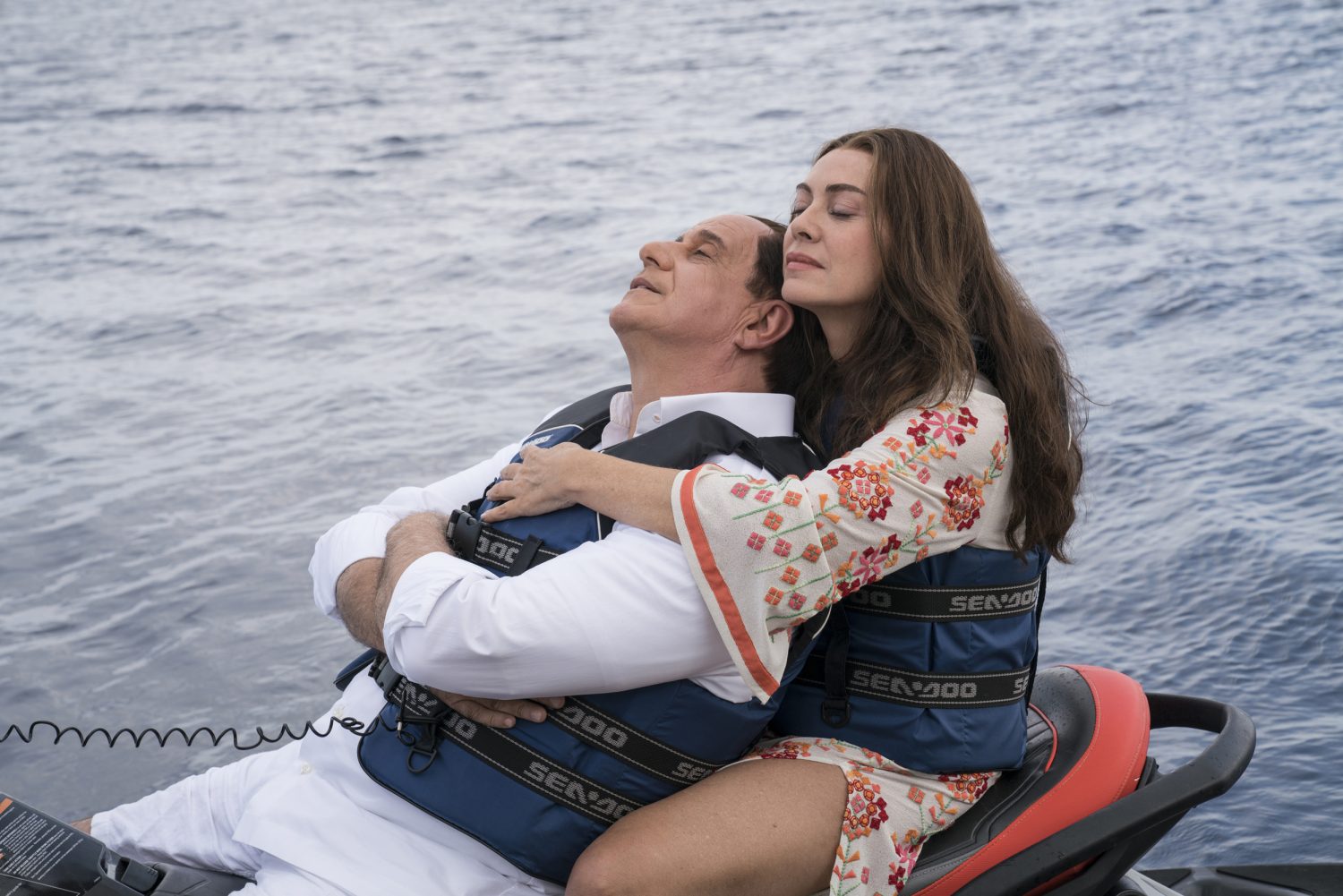 And once again Toni Servillo is the star turn and spot on as the man himself. Bringing his colossal charisma and a chink of humanity to this ebullient portrait of a leader who is foremost a salesman. It’s a film about the much-devalued power of seduction. We first meet Silvio after his government has been blown out in the elections and he needs to win back his prime position. This will be achieved by his superlative seduction technique and prepares to persuade six senators to join his party, so he can to be top dog again: “In love, you betray. In politics, you change your mind.” And this proves to be a piece of cake.

The international version conflates the director’s original two-parter into a parade of preternatural vulgarity. But there’s something compelling about the way it all plays out that is gripping until the finale. This is no dry old political pot-boiler, but an all-singing all-dancing affair where the flamboyant, flirtatious four times president (and now leader of Forza Italia) loves to party at all times. And Sorrentino knows that Italian audiences love to party too. And so the thrust of this biopic is party-time in Italy as never before (and never mind the debut-ridden economy or the Mafia): bare-breasted babes and buff boys gyrate in vertiginous coastal villa: Sardinia is seen at its most glamorous and recherché. Meanwhile, Berlusconi, when not partying or indulging in his famous Bunga-bunga games, likes most Italians, loves to seduce. And there’s an extraordinary scene where he does just that – and nobody even takes their clothes off.

The condensed cut brings a better clarity to the prostitution ring run by Sergio Morra (Riccardo Scamarcio)and his wife Tamara (Euridice Axen) and Berlusconi’s subtle distancing from his boring long term marriage to the supercilious Veronica. But it also brings into focus a narrative whose slackness contrasts sharply with the endless pertness of the bottoms and boobs on show. But this surfeit of uproarious partying eventually feels sad and vacuous also emphasising  the delusional qualities of Berlusconi’s own ego, showing him to be a narcissist and showman who deep need to be loved and admired is eventually laid bare by the fully dressed object of his ongoing affections (Alice Pagani).

We are fully aware that modern European mainstream culture is a vision of x-factor trashy tawdriness but at least in Italy there’s a certain style and enjoyment to the gaudiness. And for the most part Sorrentino’s tongue is firmly in his cheek as he showcases the endless marketing of sex as the best way to achieve the ends on the slippery pole to riches and success. There is no suggestion in any way that these girls don’t know what they are doing. They’re actually empowered by their looks and that sexiness is propulsive in a world where youth, fitness and beauty is the key to success. And it’s still the way the world goes round, whatever anyone else might suggest, a machiavellian mind and a killer instinct is the icing on the cake. Sorrentino and Umberto Contarello’s script still points out that it’s not what you know, but who you know, and laugh in the face of Veronica’s claim that her long term-husband is “pathetic”. And we do too. However depressing that may be.

Sorrentino brings us firmly back to reality with sequences showing the earthquake that destroyed the city of L’Aquila where a statue of Christ is solemnly lifted to safety from a ruined church. This is clearly a link to the real ‘them’ and seems an appropriate way to close this bacchanalian feast. MT

LORO IS OUT ON RELEASE NATIONWIDE FROM 19 APRIL 2019