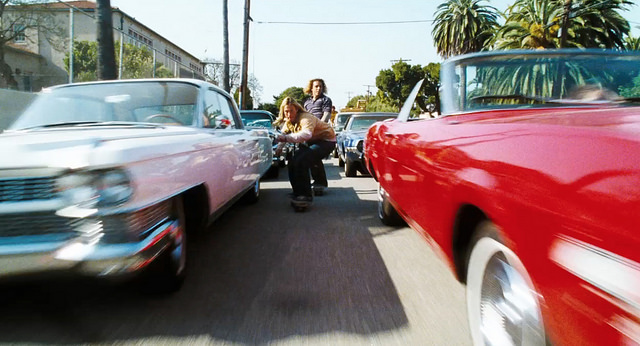 David Fincher put his money behind cult classic LORDS OF DOGTOWN, a fast-moving psychedelic arthouse trip down memory lane that rides a wave of skateboarding stunts long after the 1970s craze had hit the sidewalks of Venice Beach, California. If the ‘extreme’ sport don’t appeal to you, Elliot Davis’ winning cinematography will keep you amused, for a while at least, along with the vibrant aesthetic and eclectic score of hits from Neil Young, Nazareth, Ted Nugent and Joe Walsh.

This is the second feature of Texas-born Catherine Hardwicke who won a Silver Leopard for her debut Thirteen and went on to direct Twilight introducing the diamond duo Kristen Stewart and Robert Pattison who reigned supreme for a while as one of Hollywood’s couples. And LORDS, although obviously not a vampire movie, has a similar vibe and teenage group. LORDS OF DOGTOWN has a pleasurable rhythm with its cast of sun-kissed babes and hunky dudes in the shape of Heath Ledger, Emile Hirsch and Rebecca De Mornay, and this makes up for the rather underwritten narrative that follows the kids, or “Z-Boys” standing for Zephyr – the name of the shop where they all hang out in downtrodden “Dogtown” Venice, California. When they’re not surfing, they are spear-heading a skateboarding revolution that featured Stacy Peralta, Tony Alva and Skip Engblom (Heath Ledger), the Zephyr shop owner.

LORDS OF DOGTOWN follows on from the award-winning documentary Dogtown and Z-Boys (directed by Peralta, who here writes the script) where the doc format works slightly better, allowing us to sit back and let the experience wash over us in a highly kinetic experience, that really only needs sound and vision to drive it forward, rather than a structured narrative as such. Why dwell on the grimy backstories of these dudes from the downtown ‘dogtown’, when the joie de vivre of their skating competitions and lust for life is what really gets these guys through life Extreme sport is about entertainment and that should be the raison d’être of LORDS OF DOGTOWN. MT

OUT ON 5TH DECEMBER COURTESY OF EUREKA MASTERS OF CINEMA