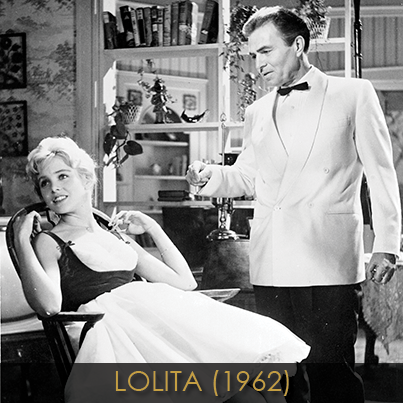 Vladimir Nabokov’s novel ‘Lolita’ was first published in France in 1955. Stanley Kubrick adapted it for the screen in 1962 but, and produced it independently in England but he commented later: “If I had realised how severe the censorship limitations were going to be, I would probably would never have made the film”.

But part of the sometimes underwhelming outcome can be found in the script written by Kubrick and James Harris (both un-credited), after Kubrick chose not to use Nabokov’s own script, for which the novelist was still credited and praised Kubrick during a private screening before the film premiered. Kubrick left out Professor Humbert Humbert’s obsession with ‘nymphets’ long before meeting Lolita, which started with the death of his childhood friend Annabel, a love affair he could not consummate. When coming to Ramsdale, Humbert had originally planned to stay with the McCoos’ and their 12 year old daughter, with whom he was in love, but the McCoos house burned down. This way, Kubrick tried to portray Humbert’s affair into some sort of ‘forbidden love’ drama, whilst the professor was really just obsessed with childlike women.

Lolita starts with a murder: Humbert (James Mason) shoots the Chopin-playing Clare Quilty (Peter Sellers), after an absurd opening line: “Are you Spartacus coming to free the slaves?” asks Quilty of his soon-to-be assassin. Flashback to Ramsdale, New Hampshire in the early 50s: it is summer, and Professor Humbert is looking for accommodation, before commencing his lectures at Beardsley College, Ohio. The landlady, Charlotte Haze (Shelley Winters), soon falls for Humbert, but he is love with her twelve year-old daughter Dolores (Lyon) whom he calls Lolita. Charlotte, who wants Humbert to herself, takes her daughter to a summer camp, writing a letter to Humbert stating that his presence in the house on her return will confirm his love for her. Humbert does stay, but leaves his diary in the open so that Charlotte can read the truth for herself and the rest, as they say, is history.

Kubrick originally wanted Catherine Demongeot for the role of the coquettish Lolita, but she was still filming Zazie with Louis Malle, so after auditioning 800 girls for the part he settled for Sue Lyon whom he chose for the size of her breasts despite her being only just fifteen when the shooting ended, and almost sixteen when the film was premiered and too young to attend the screening. It was also the first of Kubrick’s films to include a shot of a bathroom lavatory – which was to become his trademark, appearing in almost every film until his death. Score-wise Kubrick chose Nelson Riddle after Bernard Hermann had turned the project down, and Riddle achieves a frisky upbeat mood. Oswald Morris’ frigidly crisp but impressive b/w images are the highlight of Lolita, with Sellers’ multi-persona antics the low-point. Obviously, the physical encounters between the couple have to be more or less imagined by the audience, but this is not the reason for a somewhat unsubtle overall impression despite the film’s box office success, due in part to its controversial subject matter which had led to an MP losing his job. Adrian Lyne’s 1997 version clung closer to the page but was a commercial and critical failure – perhaps Lolita lives in the realms of the imagination rather than on the screen. AS/MT

NOW OUT ON DVD AND AMAZON