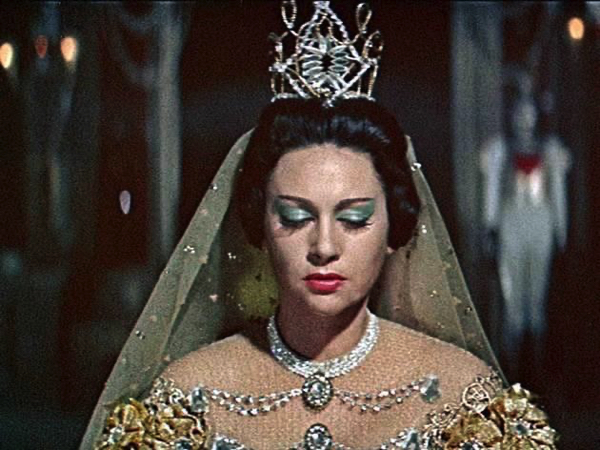 This dazzling visual masterpiece was Max Ophüls’ last feature and based on the novel La vie extraordinaire de Lola Montès by Cecil Saint-Laurent. Clearly a femme fatale Martine Carol was however, no actress and brings the film down with her lack of talent. The original version was then butchered by the producers and some shorter versions ensued, all with a linear style that destroyed the Austrian filmmaker’s original fractured narrative. Then in 2008, a restored widescreen version was made available, showcasing all the glory of widescreen Technicolor. This blu-ray further enhances the thrill of it all.

We first Lola Montès first in a circus in New Orleans where the famous 19th century dancer and courtesan is being disported by the ringmaster (Ustinov) like a fair ground attraction of times gone by. Under two glittering chandeliers (that echo the Vienna theatre, where Ophüls’ career in the 1920s), a band is playing and a chorus line of girls, juggling ninepins, introduces the ringmaster’s storyline. Lola makes a triumphant, as a counterpoint to her troubled background, which plays out in flashback, her cruel mother (Delamare), whose lover, lieutenant Thomas James (Desny) she goes on to marry. There are affairs with a a student (Werner); Franz Liszt (Quadflieg) and Ludwig I, King of Bavaria (Anton Walbrook) who leads the film along with Peter Ustinov. In the end, Lola exists only for her male audience who can touch, or even kiss her, for a Dollar extra fee.

Ophüls films are characterised by their roving camerawork uniting one moving shot to another. His grandiose aesthetic echoes in the decor – like that rather strange Goethe arch in Liszt’s room. “Details make art”, Ophüls opines. There are some rather gruesome ‘details’, a sequence showing a soldier with the maimed leg in Ludwig’s famous castle, where his servants run hither and thither on some gratuitous errand for their King.

In contrast to the ambitious settings, the script is just another version of the ‘tart with the golden heart’. Whilst Dumas’ Marguerite Gautier attempts to show humanity in a femme fatale, Lola: is all about the heroine’s exploitation. That said, the cyclical structure of many of Ophüls films: La Ronde, Le Plaisir and The Earrings of Madame de… is also visible in Lola: instead of a fade-out, the camera moves further and further away from her, the customers lining up, rather like the Chorus Girls at the beginning – DoP Christian Matras (La Grand Illusion) leading the film audience in a merry cycle, symbolised by the circus ring. Ophüls was very much aware that the audience was paying to watch his caged diva, because, as usual, the producers wanted to get their money’s worth. But Ophuls was only interested in talent and creativity. AS