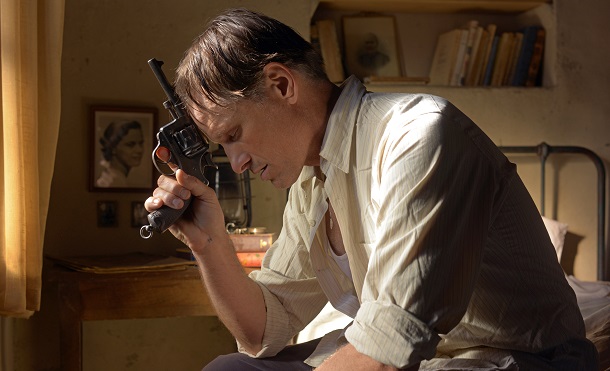 Mortensen is Daru, a Pied-Noir schoolteacher educating village kids in French language and customs in the midst of the Algerian war high in the haute plaines of the Atlas Mountains, during the 1950s. In a desolate part of the country, on the northern fringe of the Sahara, his choice of profession is to the chagrin of people on both sides of the conflict now brewing: the French don’t see the point in educating ordinary Algerians, while the natives are irritated at the instruction in French rather than Arabic.

One evening, a French gendarme hands Daru an Algerian (Reda Kateb) accused of murder and asked to transport him to the French authorities at a village a day’s walk away. However, Daru has no wish to deliver a man to a certain death (either because of his real guilt, or the prejudices of the colonial establishment). Instead, he initially chooses to do nothing, allowing the prisoner to sneak out on his first night, only to return. Daru has no easy way out, and instead is forced to make some significant moral decisions about the welfare of his charge.

Mortensen is eminently watchable as the craggy-faced Daru (it’s a face that paints a thousand unknown memories) who develops a strange rapport with Kateb’s Mohamad that is unexpectedly warm. Crossing the barren wastelands, they find themselves fleeing Mohammad’s vengeful townsfolk and freedom fighters before rebels fighting for independence capture them. Some of the soldiers recognise Daru as their unit’s leader from the Second World War, commenting that now every Algerian in his unit is fighting for independence – and he must now pick his own side. Where once he was the teacher, now he is the prisoner. Is this what happens when, as Burke would say, good people do nothing?

A terrific scene sees Mortensen’s Daru become a hostage as the rebels take fire from a French brigade, and even though the film’s political slant might be slightly blunt, this is effectively-told filmmaking with a ravishing visual style. Camus’s story is given a new life here and Oelhoffen has provided one of the best adaptations of the author’s work. While Camus’s ‘L’Exil et le Royaume’ short story hints the outbreak of a coming divisive war in the country, Oelhoffen sets his film just as the independence conflict took hold. It provides the text with a renewed sense of moral purpose that finds parallels with the troubles rocking the north African country today. Photographed with an eye for stark and barren scenery (actually filmed in Morocco) and with another great score written by Nick Cave and Warren Ellis; it looks, sounds, and thinks like an epic with big ideas. Ed Frankl.

VENICE INTERNATIONAL FILM FESTIVAL RUNS FROM 27 AUGUST UNTIL 6 SEPTEMBER 2014. FOLLOW OUR COVERAGE UNDER THE FESTIVALS BANNER.