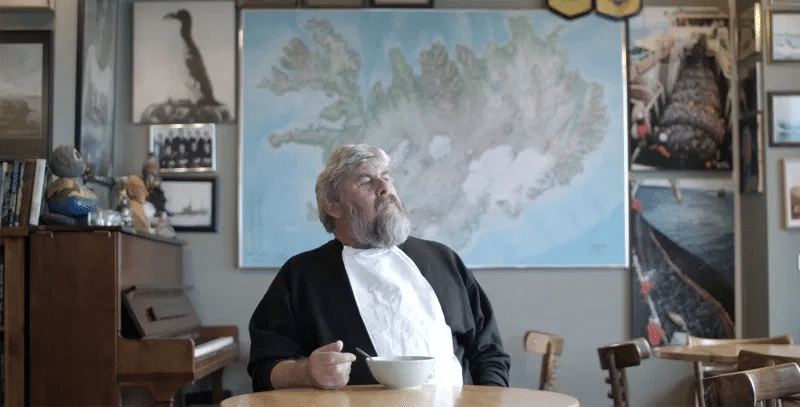 A strong sense of community is what makes cafe society so successful in the small coastal town of Grindavík on the southern peninsula of Iceland. Before the Bryggjan Cafe came into existence life in the coastal village revolved around nothing but fishing. Then local net-making brothers Alli and Krilli casually decided to set up a bar in the downstairs premises of their business.

It all started with a coffee machine, the genial couple freely admitting they knew nothing about running a cafe – or even coffee, for that matter, back in the day. But gradually with tables and chairs, the place took shape as a cosy meeting place, locals bringing the odd picture or a pack of cards to make them feel at home. And the Bryggjan cafe was born.

Lobster soup was a speciality of the house and soon became the main attraction, offered one night a week, and eventually everyday, due to popular demand. Grindavik’s only cafe is now the place to meet and have a drink and put the world to rights, a welcome refuge from the brutal elements: biting winds and driving snow. The Bryggjan Cafe is also the shipping port’s cultural centre offering a venue for poetry readings and singalongs and giving the locals a chance to wile away long winter evenings: it helps that more or less all of them grew up nearby.

As Alli and Krilli shoot the breeze with the locals and tourists alike, what emerges is a potted history of the region showing how dramatically life has changed in this small corner of Iceland. The influx or tourists and the introduction of quotas is part of the reason why, but surprise eruptions from the nearby volcano adds an elements of danger, threatening their daily existence, along with the unwanted arrival of the US military. Despite all this, outsiders are drawn here by major attractions of the Blue Lagoon and the proximity of a nearby international airport. Iceland has become a wealthier nation as a whole and more integrated into the rest of Europe as part of the EEA.

But former fishermen Alli and Krilli have the future to think about now their net-making business is in decline so they need to take the establishment onto the next phase of its existence. The brothers are not getting any younger, and Alli’s wife would like to get back to her family in Rekyavik. An offer to sell forms the dramatic turning point of this engaging look at a thriving maritime community, vibrantly brought to life here by Spanish filmmakers Jose Andreu Ibarra & Rafa Molés. They act as their own DoPs to create a real sense of the hostile landscape and the bleakness of the great outdoors thats contrast with the warmth of the Icelandic people who have managed to combine the best of both worlds: a strong and traditional sense of community with a decent economy boosted by tourism. MT