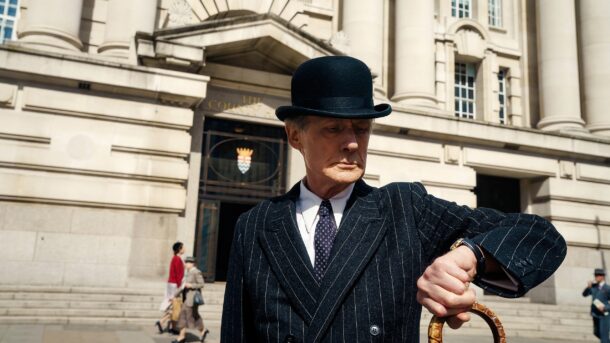 The English middle class world of the 1950s is gracefully captured here in a sombre but sonorous drama about a dying civil servant. What makes it particularly interesting is that the director is South African Oliver Hermanus and the screenwriter is the Japanese born novelist and Nobel prize winner Kazoo Ishiguro (Never Let Me Go) whose story of discrete mid 20th sensibilities was inspired by Akira Kurosawa’s 1952 masterpiece Ikiru (To Live).

Quintessential English maxims like ‘keep calm and carry on’ and ‘never explain, never complain’ immediately spring to mind with reference to Living‘s noble main character Mr Williams who is the embodiment of a dissipated but dignified gentleman of a certain age – and played wistfully by Bill Nighy – whose world is rocked by the revelation that he is suffering from terminal cancer. But life goes on in the corridored confines of his Civil Service offices where he heads a department dedicated to planning applications, staffed by his young assistant Mr Wakeling (a thoughtful Alex Sharp), who guides us through the film, and secretary Margaret (Aimee Lou Wood of Netflix’ Sex Education) who could best described as gently ‘petillant’, rather than ‘bubbly’ – a quality normally ascribed to female typists in the small ads, back in the day.

Moving but never sentimental, one of the more touching scenes pictures Mr Williams at home and desperately rehearsing the words to explain his diagnosis to his son and daughter-in-law who are unaware of his presence in their unlit sitting room, and at the same time, talking amongst themselves about asking him to move on, And this tragic event sets in motion Mr Williams’ determination to start living before he dies.

In Brighton, regarded as a louche seaside setting back in the 1950s, Mr Williams comes across Mr Sutherland (Tom Burke) a writer of questionable origins, and engages on a night of excess that unleashes in Mr Williams an impressionistic reverie of nostalgic thoughts and ideas as he reflects back on his life. These scenes take on a dreamlike quality expressed by vibrant juxtaposed images, in contrast to the crisply formal daily procedural he has grown accustomed to in the offices the Civil Service in County Hall.

Returning to London he encounters Margaret and decides to invite her to join him in his final ‘hurrah’. At this point he also takes to singing a plangent Scottish folk song as he swings in the children’s playground at dusk. The final act briefly explores Mr Williams’  last planning project and labour of love – a children’s playground built on a former bomb site in the East End. And this provides the film with a whiff of internecine controversy amongst his staff who claim the iniative as their own. The final scenes are slightly underwhelming but nevertheless provide a satisfying finale to this elegant and rather lovely look back in time. MT

NOW ON RELEASE IN CINEMAS NATIONWIDE.