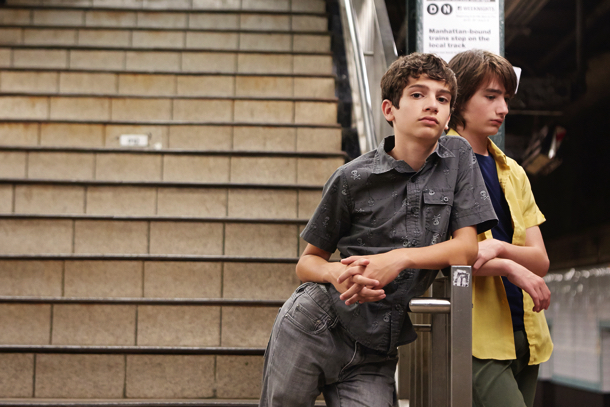 Best known for his theatre work, director and co-writer Ira Sachs’ follow up to his screen debut Love is Strange is a keenly observed story of two teenage boys whose friendship is threathened by parental intervention and an overdose of middleclass cultural aspirations.

Jake (Taplitz) moves with his parents, psychologist Kathy (Ehle) and actor father Brian (Kinnear), from a small flat in Manhattan to a bigger place in Brooklyn. The reason for their advancement is the death of Brian’s father, who left them the flat and a shop, where Chilean emigrant Gloria (Garcia) works and lives in a small backroom with her son Tony (Barbieri). Both boys are in their early teens, interested in art, and want to go to a prestigious high school. Due to her friendship with Jake’s grandfather, Gloria is still paying the same rent as when she moved in years ago and Brian needs to increase her rent to supplement his meagre income as a fringe actor and he is encouraged in this decision by his sister Audrey (Balsam), who owns a share. But Gloria cannot to pay any more and when Jake learns about the eviction order for his friend Tony, he breaks down in tears and asks his father in front of Gloria, to reconsider.

Even despite its meagre running time of 87 minutes, LITTLE MEN suffers from this rather slim narrative but the glaring flaw lies in the cultural discussions between father and son. Sachs takes very much an adult view of teenage boys: fourteen year olds do not engage in lengthy discussion about the proper way to become an artist – unless they are child prodigies – and very few are capable of intensely watching a performance of Chekov’s Seagull, even with a parent as the lead. LITTLE MEN would have been more convincing if Sachs had focused more on the conflict between Jake’s high-minded parents and the Chilean immigrant, Gloria. Performances on the whole are convincing, with a brilliant turn from Paulina Garcia in the role of Gloria. DoP Oscar Duran employs sensitive panning and long tracking shots to show the anguish and disappointment of all concerned. But a superfluous ‘second’ ending leaves even more to question. Had Sachs taken a more teenage viewpoint of the storyline, LITTLE MEN could have been a real gem. AS

NOW ON RELEASE FROM 23 SEPTEMBER AT SELECTED ARTHOUSE CINEMAS.