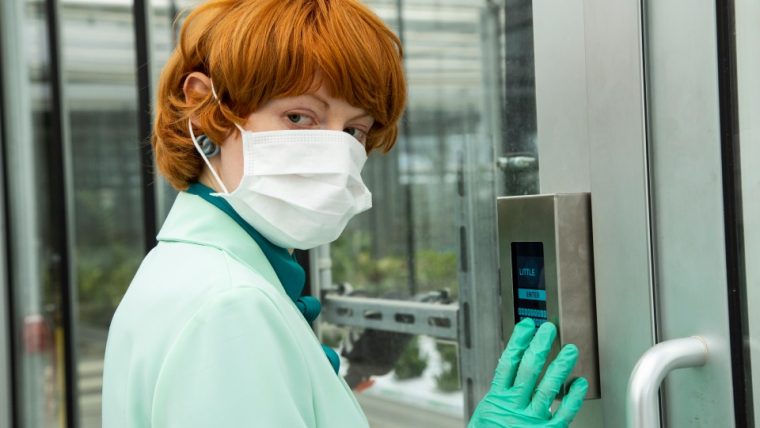 Austrian auteuse Jessica Hausner creates films that are intelligent and refreshing. And none more so than her recent Cannes competition entry Little Joe. A challenging, coldly humorous hyper-realist Sci-fi that explores the unique human condition known as happiness.

Sometime in the future Emily Beecham plays Alice, an emotionally buttoned up ‘plant designer’ who develops a scarlet thistle-like flower whose scent makes people happy, and is sure to catch on  commercially. But there’s a snag: the plant also makes subtle changes in the personalities of those who inhale its pollen. It also causes seems to destroy neighbouring plants in the laboratory.

Little Joe is a mesmerising film to look at: its brightly synthetic colour schemes, geometric framing and slightly off-kilter performances are undeniably eye-catching and entirely appropriate given the subject matter: genetic modification. This is not a film to love but a film to admire, the strange storyline keeping us agog in fascination until the surprising finale.

Once her pioneering plant is in full flower Alice names it Little Joe, and brings a sample home for her teenage son Joe (Kit Connor) to tend – she’s a rotten workaholic mother hooked on Deliveroo dinners, but hopes the plant will bring out her son’s nurturing side.

Meanwhile, in their slick laboratories and mint green uniforms, Alice and her colleague Chris (Ben Whishaw) are certainly more commercial scientists than traditional plants people, but Chris is the more appealing and emotionally intelligent of the two. Their chief designer Bella is an earth mother and soon notices that her beloved shaggy dog Bello has undergone a complete change of personality since sniffing pollen from the odd-looking thistles. The staff put this down to Bella’s mental health issues and move swiftly back to their microscopes. But these weird changes cannot be ignored for long.

Sound plays an important role throughout this unsettling story and Japanese composer Teiji has devised a spooky electronic soundscape for each phase of plant development. Hausner has seemingly gone out of her way to assemble an eclectic multi-racial cast and this certainly adds flavour to this exotic con concoction but Beecham, Wishaw, Kit Connor and his dad (Goran Costic) are particularly affective in striking the right mood. And if you think Little Joe bears a strange visual resemblance to another recent Austrian chiller you’d be right: DoP Martin Gschlacht also filmed Goodnight Mommie (2014). MT