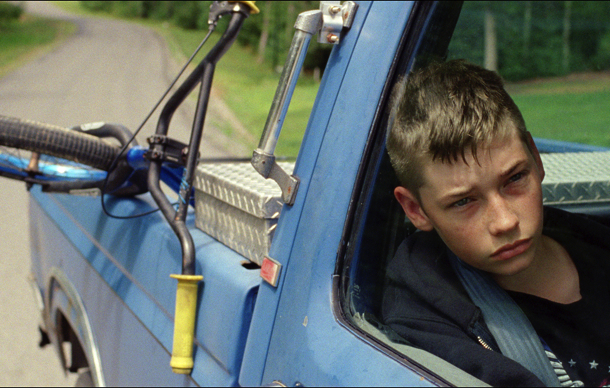 Grim reality bites for three people thrown together in the aftermath to tragedy in a depressed mining town. Sara Colangelo’s bleak drama tackles themes of class, comradeship and guilt affecting a community when ten families lose their loved-ones and potentially their livelihoods.

Boyd Holbrook plays Amos, a coal miner who is the only survivor of the accident. He’s faced with the invidious task of giving evidence on behalf of his co-workers to secure a large cash settlement from the management or keeping quiet in case the mine is shut down, risking the futures of those unaffected. Another victim is teenager Owen (Jacob Lofland from Mud) whose father was killed and whose mother (Chloe Sevigny) wants to use her settlement to spoil her bereaved sons incurring the envy of his schoolmates, one of whom, JT, is the son of the manager (Bill Doyle) implicated in the accident, caused by professional negligence. During a scuffle in the woods,  Owen witnesses JT’s death in a fall and is forced to remain silent whilst his mother (Elizabeth Banks) waits in agony for news.  The fallout to all this is intriguing and immersive as Colangelo explores the different relationships and dynamics, feeling her way intuitively with a slow-burning visual narrative, assisted by Rachel Morrison’s softly focused camerawork that makes good use of the dourly atmospheric West coast landscapes.