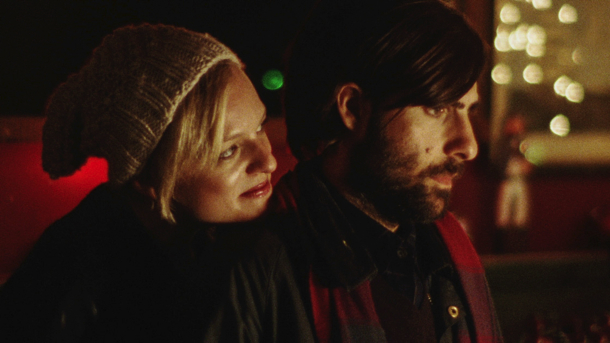 Philip (Schwartzman) is a promising young writer and emotional illiterate. To be precise, he not only champions the egocentrics of the (male) world, he is also a fierce misogynist who blames women for his self-destruction; sabotaging every relationship and feeling an enormous amount of self pity. In a word, he is a complete a..hole. An all-knowing voiceover recounts not only what’s going on, but also past and future pitfalls of this rather one-dimensional character.

The main recipient of Philip’s lust for alienating is his girlfriend Ashley (Moss), a professional photographer who has supported Philip during the many years of unpaid literary work. Now, with his second novel a success, Philip moves out, to live with his hero, the writer Ike Zimmerman (Pryce) in the countryside. The old man is a much further developed person-destroyer than Philip. The way he treats his daughter Melanie (Ritter), can only be described as serious psychological harm. Needless to say, Philip, a quick learner in these matters, soon treats the young woman the same way. After another failed relationship with a young French fellow college- lecturer, Philip runs home to Ashley in New York, like a naughty boy to his mother – only to be told, that the his ex is happy with a cat. The voice over tells us, needlessly, that Philip will not learn make any emotional progress in his life.

Alex Ross Perry’s narrative would have been successful for a thirty minute short film, but blown up to nearly two hours, it soon looses our interest in Philip and his rather predictable rants. It ceases to be funny, and with the voiceover taking away any possibility of surprise, we just wait for the words to end. Camera work is lacklustre and conventional, the actors have little scope to display any merit, being reduced to card-board cut-outs. LISTEN UP PHILIP is much closer to a radio play than a film. Somehow, writer/director Perry suffers from the same male hypertrophic beliefs his main protagonist, that great lines alone make a person. A regressive and awesomly repetitive outing. AS