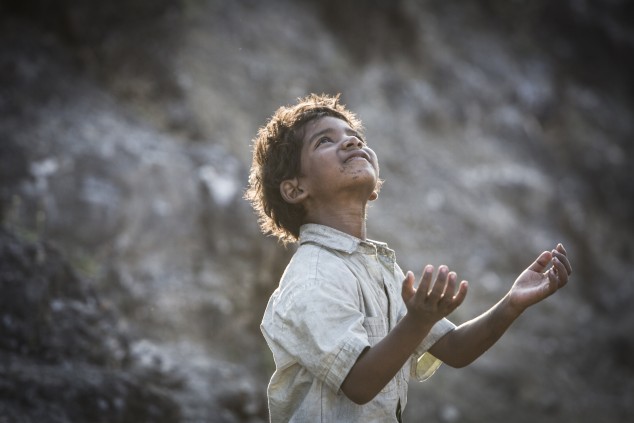 Garth Davis co-directed the TV-Miniseries Top of the Lake with Jane Champion and now turns his hand to Saroo Brierley’s autobiography A Long Way home with Luke Davies adapting it for the screen as a sprawling emotional drama that sometimes crosses into soap-opera territory. Davis’ advertising background – among his credits the Toyota “Ninja Kittens” – makes this a slick and visually ravishing watch with DoP Greig Fraser (Foxcatcher) conjuring up amazing images, particularly in Calcutta.

Newcomer Sunna Pawar (young Saroo) is spellbindingly gorgeous as the young boy who in 1986 is separated from his mother Kamla (Bose) and sister Shekila, after talking his older brother Guddu (Bharate) into taking him away from their rural home to help on a building site. But Saroo falls asleep at the station and wakes up in a decommissioned train, taking him 1000 miles away to Calcutta. There he avoids child-snatchers and ends up in an orphanage. Saroo cannot speak the local Bengali, and his Hindi dialect is insufficient to express the name of his village or his mother. Roughly half-way into the film, Saroo ends up in Tasmania, Australia, where Sue Brierley (Kidman) and her husband John (Wenham) adopted him. Saroo is an exemplary son, relieved to find a home of emotional and material wealth after his traumatic time in Calcutta. But Mantosh, the second boy adopted by the Brierleys, is unable to cope with his past and is proving a handful.

The plot skips forward about 20 years to when Saroo (Patel, star of Slumdog Millionaire) has left the home where Mantosh (Ladwa) is now self-harming and troublesome. Saroo takes a course in hotel-management in Melbourne where he meets Lucy (Carol co-star R. Mara) a lover of Indian food. Tasting a childhood sweet one day he realises that his hometown is not Calcutta. His search for his hometown is the weak link in the narrative, his traumatic experience is seen as an hero’s adventure, rather than an ordeal. Although this is underlined by the breathtaking images, showing Calcutta in high-resolution fly-over shots, the emphasis is on the thrills, rather than the terrible danger Saroo experiences there.

There is simply not enough darkness in Saroo’s Calcutta abandonment years – and when he finally enters the Brierley’s home in Tasmania, he appears blasé about the sensational new home comforts  – such as the ‘fridge and television, rather than awestruck. He also seems to lack an inner life whereas Mantosh is a far more believable character. Apart from skimming over this relationship with Mara, it is never explained Saroo waits so long to look for his birth mother – the sweet he remembers from his childhood can hardly be the first or sole reminder? It is stringent – and rather lazy – in this context, that Google Earth is just another star in the visual high-tech extravaganza. It would have been more interesting and convincing to show the search for her son from Kamla’s perspective, without the intrusion of computers. LION triumphs despite these plot-holes: a powerful and sumptuously photographed tear-jerker with a happy ending, despite its lack of teeth. AS