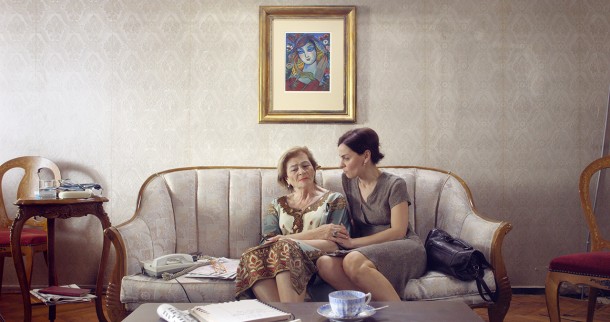 Georgian filmmaker Salome Alexi’s LINE OF CREDIT is a finely-tuned and delicately rendered comedy teetering on the brink of tragedy to paint a tense yet elegant picture of a well-to-woman family forced into debt in penny-pinching post Soviet Georgia.

Purple-tinted pastel visuals and careful mid-distance framing echo Miss Violence but this is lighter in tone lacking the glowering menace of Avranas’ outing , despite its serious undertones. A predominantly female affair, it sets off with a large family gathering to celebrate an elderly woman’s birthday in the faded grandeur of the upmarket apartment she shares with her middle-aged daughter Nino and her husband in Tbilisi. It emerges that Nino had pawned her mother’s wedding ring to pay for the party. Close friend Lili (Alexi) reveals, in a discrete post prandial tête a tête, the need for an operation but can’t afford the medical cost but there is a crafty way round this involving her joining a drug programme. Meanwhile the aristocratic Nino (Nino Kadradse) and her mother are quietly selling off the family porcelain to cover expenses.

Graceful and soignée, Nino keeps up her appearances while constantly scrimping and saving to run her small cafe in a quiet corner of the bustling capital. Enlivened by occasional bursts of local music, this intimate domestic drama depicts a close knit community that cares for each other in frequent encounters and conspiratorial chats but the debt-ridden duos invariably focus on money matters and will resonate with art house audiences experiencing the need to tighten their belts. Alexi’s well-crafted and watchable debut gradually builds towards a shocking climax and by the end we feel thoroughy au fait with contempo middle class Tbilisi and its subtle yet far-reaching political undercurrents. MT