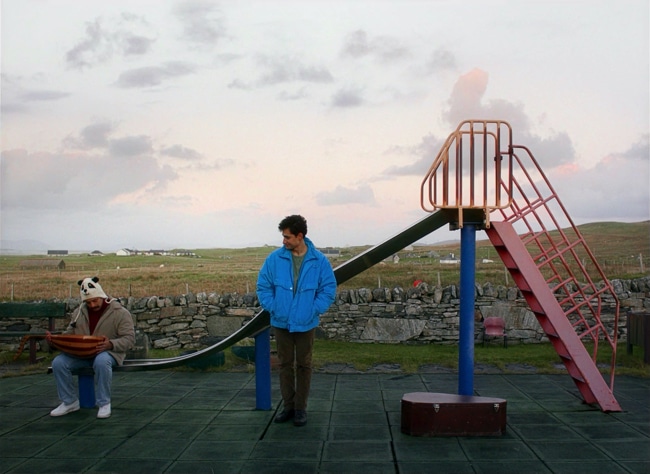 A group of refugees fetch up on a remote Scottish island in this artful and darkly amusing comedy drama lampooning the migrant crisis.

The common denominator is their single, masculine status. If they were married with kids they would be placed in a stylish new-build in the centre of Edinburgh, or even London. But it’s a grim lot for the single male of the species who arrives in these rain soaked islands looking for a home. And the Scotts director shows the same sober look and lugubrious humour as Pablo Stoll’s cult classic Whisky (2004) or Aki Kaurismaki’s Berlinale winner The Other Side of Hope (2017). However, his visually imaginative style and symmetrical framing also make this a sumptuous treat.

The migrant crisis is certainly no joke. In fact it has become somewhat of a political hot potato as the lost and disenfranchised arrive here hoping for the legendary streets of gold and find instead cold tarmac, wind-lashed landscapes and little to comfort them in their time of need. Sticking out like proverbial pork pies at a Jewish wedding these likeable and nice-looking men are jeered at and taunted as they make their way through chilly seascapes in search of something to keep their minds occupied in the inclement weather.

The painterly piece unfolds in the sparsely populated Western Isles of the Outer Hebrides (North and South Uist) under smoky grey clouds and gentle hilltops stroked by softly wavering grasses and purple skies. “If you’re lucky enough to be here in Winter you may experience the Northern Lights” says their English teacher as he instructs them on the past imperfect, asking for an example of its use in a sentence: one bright spark suggests: “I USED to have a home until it was destroyed by allied forces”.

Essentially a series of carefully crafted episodes – each playing out like an individual comedy vignette – the story follows Syrian Oud musician and war victim Omar (Amir El-Masry) who left his older brother still fighting; Afghani Farhad (Vikash Bhai) and two West African brothers suffering from sibling rivalry. Wasef (Ola Orebiyi) and Abedi (Kwabena Ansah) bicker the hell out of the squalid damp-ridden cottage the men share, warmed only by a two-bar electric fire. They all have convincing backstories and are ridden with guilt and worry about the families they have left behind. Poor internet coverage makes matters worst.

Writing and directing this second feature, Sharrock calls on his own life experience working in a refugee camp in the Middle East where he was inspired by the sorrowful characters he met, all hoping against hope for a positive outcome. Here at least they get “cultural awareness” lessons hosted by a well-meaning couple, Helga (a strangely underused Sidse Babett-Knudsen (The Duke of Burgundy) and Boris (Kenneth Collard). But the even-handed narrative eventually gives way to a grudging mutual respect with their pale-skinned hosts who recognise they are well-educated and versed in the ways of the world. And the tone darkens when a crisis arrives for the sheep farmers during a snowstorm, and Omar is required to pitch in.

The sheep incident unleashes a disturbing magic realist reverie for Omar, transporting him back to his roots in scenes that hint at a gravitas the film does not possess compared with the levity that has gone before. But despite the slight tonal flaw Limbo is a highly accomplished and thoughtful film that cements Sharrock’s place as a promising British talent on the international scene. MT