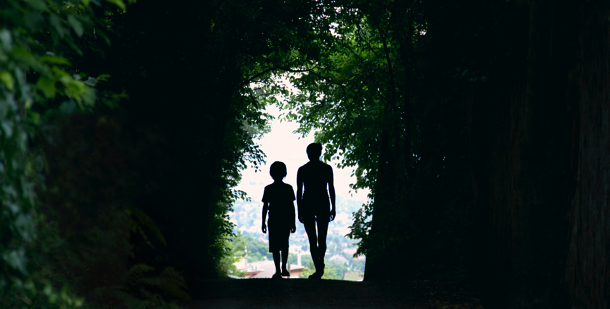 Hungarian filmmaker Bence Fliegauf creates a world of fantasy based in the reality of a divorcing couple and their small son. With a few simple devices: a ghostly original score, technical effects such as slo-mo and extreme close-ups as the camera glides over his toys and giving them a otherworldly appeal, while a young woman slowly spins a fairy story. Bence Fliegauf’s mesmerising debut drama slowly emerges like an enigmatic crystalis from its cocoon. By associating simple objects and images – a broken toy, a stuffed animal, a mask, a stormy skyline: a suggestive narrative emerges connecting with our own childhood experiences of fear. Rebeka and Dani face these fears head on – embracing them to create their own fantasy world that drives the narrative forward.

In flashback, Rebeka (Angéla Stefanovics) casts back to happy times when her son was born. Clearly she was loved but now wants a separation from his father, but not a divorce on paper. LILY LANE shifts backwards and forwards; a stream of consciousness that sparks subconscious fears and memories of childhood, life and love.

The story unravels in black-and-white photos, snapshots of the physical intimacy and unique bond between mother and child. Often the camera creeps around at strange angles, giving a voyeurish feel of impending and oppressive doom and building palpable suspense. Angela Stefanovics is well cast: her dark looks are bewitching and she gives the impression of a being a soul from a bygone era. Her sudden emotional outbursts evoke impending tragedy or mental instability brought on by post traumatic stress. Her son asks simple questions: “what happens when we die” yet in the film’s context they often appear ghoulish. Fliegauf’s cognitive dissonance technique is similarly used by Veronika Franz in her debut Goodnight Mommy. Based on montage made with cleverly edited mixed technology LILY LANE is a simple yet highly effective fantasy drama that plays on the senses and remains in the memory. MT