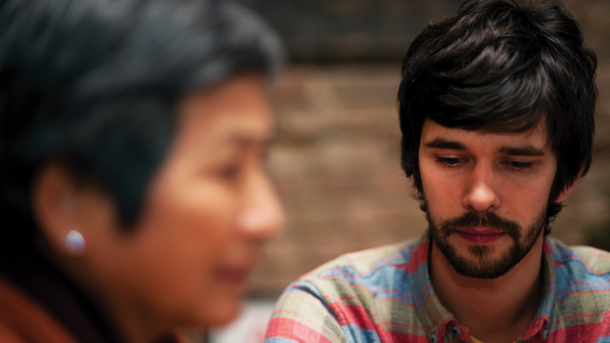 LILTING, is the feature debut of writer/director Hong Khaou. Made on a shoe-string, this simply-told and sweet-natured drama, sensitively explores loss, denial and grief that ensues when gay writer Richard (Ben Whishaw) loses his partner Kai (Andrew Leung) in a tragic accident. Kai’s Chinese-Cambodian mother Junn (Cheng Pei Pei), also struggles to accept this sudden loss, and the nature of the relationship between Richard and her son. Having recently been moved to a retirement home, she speaks little English and is resentful at this isolation from her only son, who never told her of his homosexuality. Richard, at pains to support her emotionally despite the language barrier, feels hurt by her mild hostility, as he suffers with his own grief.  But when Alan (Peter Bowles), a kindly gentleman in the care home, makes romantic overtures to Junn, it’s clear that the language of love transcends the spoken word.

Hong Khaou shows how language is so much more than just mere words: while words can build a dialogue between people, sometimes body language and gestures can build a more significant rapport. When (Naomi Christie) arrives to interpret between them, her well-meaning efforts clarify matters for Richard, yet threaten the relationship between the amorous couple. A whole cultural mindset divides these people, who despite waves of goodwill, are still oceans apart. Ben Whishaw is moving as a man diminished by grief, yet determined to act with integrity and despite occasional lulls in pacing, and the implausible rapport between the love-birds, his mesmerising performance holds it all together.  MT