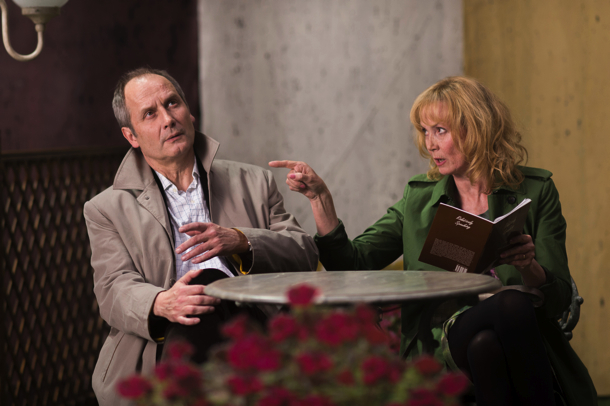 For his 50th film, which also turned out to be his swan song, French Wave maverick and King of the fractured narrative, Alain Resnais offers up another Alan Ayckbourn adaptation with this reasonably straightforward, stylised comedy LIFE OF RILEY.

Some will find this utterly charming and idiosyncratic, others an irritating and rather twee affair with its garish theatrical sets and cutesy cardboard cut-out collages introducing the locales intercut with occasional glimpses of leafy countryside in the Yorkshire Dales. Starring the habitual Resnais collaborators: wife, Sabine Azéma, André Dussollier, Hyppolyte Girardot and Sandrine Kiberlain, it’s just the sort of thing that French audiences of a certain age will lap up but it does beg the question: ‘do we really need another stage adaptation (his third) of YOU AIN’T SEEN NOTHING YET?’

You know the story by now: George Riley, close friend of middle-aged, middle-class couple, Colin and Kathryn, is diagnosed with terminal cancer. Or is he? What follows is a lively farce with highly mannered performances all round from a French cast at the height of their game playing English characters with a script translated from English into French and then conveyed (presumably by Americans) into English subtitles. All somewhat of a feat and one that required three script-writers to perfect with some degree of aplomb – somehow it works. It will certainly appeal to diehard devotees of the iconic French filmmaker whose endeavours started over 50 years ago with the sublime HIROSHIMA MON AMOUR (1959) and end here with an Englishman’s work. A shame, then, that his sign-off film could not have been something as completely wonderful and unique as LAST YEAR IN MARIENBAD but then, at 91, achieving anything is wonderful. MT

ON GENERAL RELEASE FROM 6TH MARCH 2015