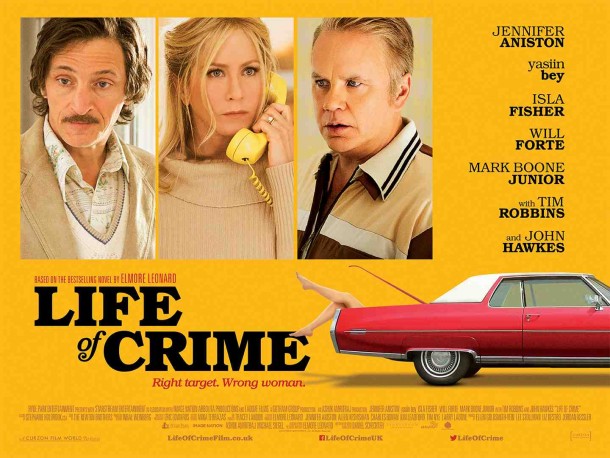 Based on the novel The Switch (1967) by Elmore Leonard, LIFE OF CRIME is set in Detroit in 1978, were two small time crooks Ordell (Bey) and Louis (Hawkes) are setting their minds on a million Dollar coup: they kidnap Mickey Dawson (Anniston), wife of the crooked property developer Frank (Robbins). But they have not bargained for Melanie (Fisher), Frank’s girlfriend, who has persuaded him to send his wife the divorce papers, which coincides with her kidnapping. And when Ordell phones Frank at Melanie’s at her place in Florida, Frank seems to be reluctant to come up with the one million Dollar ransom – particularly since Melanie is telling him how much he can save if his wife “disappears” for good.

Meanwhile, Ordell and Louis have trouble on their own: they have incarcerated Mickey in Richard’s flat, but the fat man is a crazed fascist and Hitler fan, who wants to rape Mickey. Louis saves her just in time, and takes her back to her home, where she finds the divorce papers. Meanwhile, Ordell has travelled to Miami, where he meets Melanie, to put the screws on. But after they got to get to know each other better, Melanie tells him that he is a great stud, but a lousy extortionist. She goes with him to Detroit, to take things into her own hands. But Louis and Mickey convince Ordell, that they have taken the wrong “Mrs” Dawson..

Schlechter stays very much with the style of Barry Sonnenfeld’s film of Leonard’s novel of the same name, Get Shorty, from 1995. Apart from the Richard character (who is later shot by the police) nobody is really dangerous, just misguided. Robbins is particularly convincing as the double-crossing husband, he is ice cold when he meets Mickey after her ordeal, just interested in how much the divorce will cost him. Fisher is slightly over the top in her utter superficiality, but Bey and Hawkes are brilliant at the two low-lives, being in over their heads. There is little to chuckle about, because everything is simply too lightweight to make any impact. Whilst everything, including the camera work, is very professional, LIFE OF CRIME feels like one of those slick but slightly anonymous pictures from the nineties. And there’s nothing wrong with that.. AS

OUT ON 5 SEPTEMBER 2014 COURTESY OF CURZON WORLD