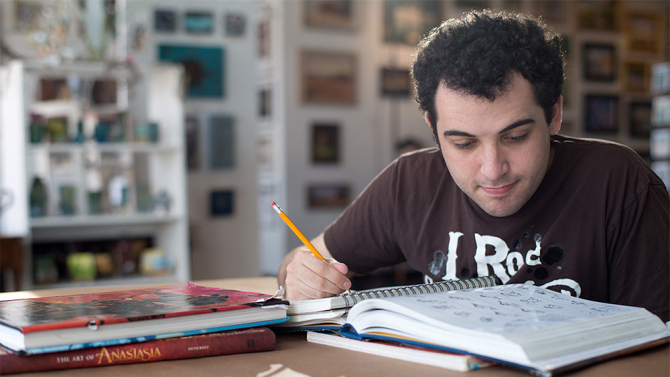 Director/co-writer Roger Ross Williams (God loves Uganda) offers up a humane and hopeful portrait of Autism Spectrum disorder (ASD) through sufferer Owen Suskind and based on “Life, Animated: A story of Sidekicks, Heroes and Autism” by Owen’s father, the Pulitzer winning journalist Ron Suskind, who is also the executive producer of this documentary.

When Owen Suskind was three years old, the communicative and lively boy withdrew into himself cognitively and emotionally. For over four years, his only stimulation where Disney films, which he watched over and over. When his father Ron and mother Cornelia were told that their youngest son was suffering from ASD, their dream of a perfect family life was shattered. But with the help of therapists they have enabled their son, who is now 25, to lead an assisted but nevertheless rewarding life with his own home and romantic attachment. Owen gave a speech to a conference of specialists in autism in France, and hosts a radio-show. His message to all his audiences is clear: autistic people do not want to be alone.

LIFE, ANIMATED does offer insights into ASD: one of the signs is Echolalia, a sort of parrot speech, which peaks with normal children at around 30 months, but ASD sufferers, who have great anxiety problems because their brains are differently wired, do not unlearn this early communication model. Their prediction and anticipation timing is much slower than the norm. Furthermore, as Owen’s history proves, they often suffer from weak co-ordination and motor planning inflicted by a low muscle tone which leads to walking impairment, amongst other inflictions. Because those afflicted by ASD have great difficulty identifying the meaning of words, due to a lack a rhythmical understanding of the words, their speech is often slow and sometimes difficult to understand and this is made worse because they cannot grasp the body language of the person they communicate with. Owen proves over and over again that this is not because of a mental disorder, his drawings and acute analysis of concepts like heroism, in his beloved Disney world, show a vivid imagination and acute knowledge of interactions. But this is limited to the black-and-white world of Disney cartoons. In the real world, Owen struggles, because the signals he gets from his environment are not clear and understandable for him. If we consider that we all suffer from double-bind signals given to us, we can imagine how hard it is for someone like Owen to cope with contradictive signals given by the adult world he lives in.

His first relationship with Emily, who also suffers from ASD, comes to an end, because she does want the closeness Owen needs. Owen is stunned, because Disney movies, with their regular happy-endings, have not prepared him for this outcome. As his older brother Walter – who is prepared to look after him, when their parents are gone – muses, Disney has not prepared Owen for a normal sex life, since there is no “Disney Porn”. It is a sign of normality – rightly or wrong – that children who want to be Superheroes, are seen as normative, whilst Owen, who identifies with all the sidekicks in the films, is really much more realistic than his so called normal brethren.

LIFE, ANIMATED is greatly helped by the original animation of Mac Guff, who draws the world in which Owen lives. DoP Tom Bergmann’s close-ups of Owen are highlighting the world he lives in – trying to understand a universe that does not always complies with the norms of his Disney world. A deeply humanistic and emotionally satisfying documentary showing that the other side of ‘normal’ is often more innovative than the bland world the rest of us live in. AS

SCREENING AT BERTHA DOCHOUSE FROM 9 DECEMBER 2016