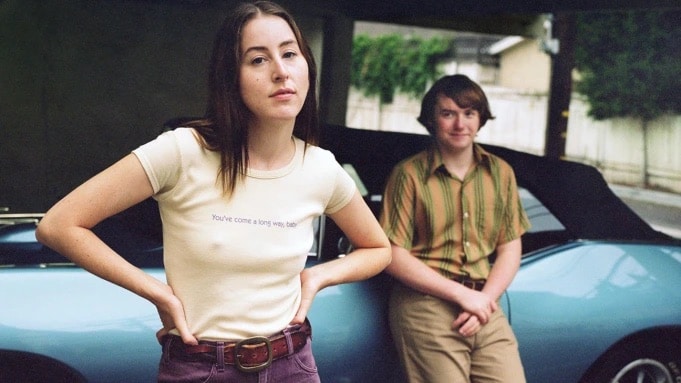 The excitement and enthusiasm of being a teenager in search of the American Dream is captured in this satirical trip down memory lane set in the early 1970s during the politically turbulent years of Vietnam and the Watergate scandal.

Paul Thomas Anderson follows a string of memorable and diverse classics: Boogie Nights, Punch Drunk Love, Phantom Thread and There Will Be Blood with a soulful romantic comedy that unfolds in California’s San Fernando Valley where Gary Valentine (Cooper Hoffman, son of Philip Seymour) is a chubby spirited high school actor experiencing first love with his much older crush Alana Kane (Alana Haim), a gutsy Jewish girl with plenty of chutzpah and an overbearing father.

Much more than just a punchy coming of age story Licorice Pizza is a nostalgic journey through America in the Nixon era with echoes of Taxi Driver and The Graduate – and the same grainy look – and a soundtrack of iconic recalling a time where opportunities were endless and brushing up against Hollywood stars was still possible in the everyday scheme of things before they became a protected species. And the teenage realisation that they are just flawed, ordinary people, not gods to be aspired to gives the film some of its most enjoyable scenes.

Gary is not held back from pursuing Alana despite his puppy fat and pubescent acne. His inherent self-belief and entrepreneurial flair soon sees him capitalising on ‘start-ups’ involving pinball machines and the famous craze for water beds: a doomed endeavour involving a celebrity client in the shape of Bradley Cooper’s egocentric Jon Peters is one of the funnier detours the film takes, and there’s a surprisingly sinister undertone to Alana’s episode with Ben Safdie’s aspiring political candidate. This adds a dose of tension to her on/off relationship with Gary making it feel all the more genuine in its avoidance of sentimentality both in sunny and sombre moments – the two of them always feel real and endearingly human in their spiky single-minded belligerence. A bit of an odd couple at first Alana Haim and Cooper Hoffman’s gradually emerging on screen chemistry is why the film is so compulsively watchable.

The film goes to unexpected places but always keeps us onboard with its compelling teenage love story that is charming, quirky and totally unpredictable – just like real life. We are drawn further and further into Gary and Alana’s world with its soap-opera elements in a narrative so rich and surprising it could go on forever.

Another part of the film’s success – and a great deal of the subversive fun – comes from trying to guess the real people behind the made up names (apart from Jon Peters): Sean Penn’s character Jack Holden and John Michael Higgins’ Jerry Frick are so familiar yet there’s a inclusive quality that makes them feel absolutely right for the era, whoever they are. Featuring a seemingly endless cast of well-tuned interconnecting characters Liquorice Pizza builds an entire world in the Valley that is both intimate and far-reaching in its scale. MT