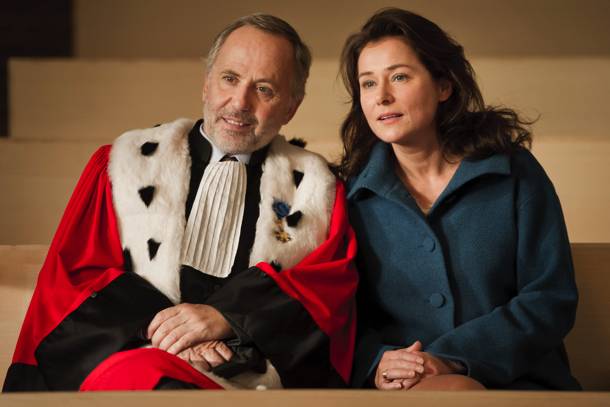 United with Fabrice Luchini, the star of his 1990 film La Discrète, director Christian Vincent’s drama COURTED observes the goings on in a courthouse in Saint-Omer, north-west France, where the trial of a presumed child murderer is taking place.

Judge Racine (Luchini) is presiding over the trial, he is not very much liked, his frigid manner and punitive nature earned him the nickname “Double-Figures” because of his severe sentences. The defendant, a young man is not very helpful, he simply repeats that he did not kick the four-year-old Mélanie to death. Racine, who is in the process of divorcing and lives in a hotel, comes down with a heavy flu at the beginning of the trial, which does not improve his mood. But soon enough, Racine mellows, when he finds out that one of the jurors, Ditte Lorensen-Coteret (Knudsen), is the anaesthetist he fell in love with in the hospital where she treated him after an accident. Suddenly, Racine becomes human and allows the defendant to go free, since it is clear, that he covered up for his girl friend, who was expecting another child at the time of the crime.

The meetings in a restaurant with Ditte show another side of Racine: he is a lonely man, only too willing to impress Ditte, even trying not to show his annoyance at her internet-obsessed daughter, who hijacks the rendeszvous of her mother. The visuals cleverly convey the two levels of this film: medium and wide shots dominate the court scenes, close-ups the restaurant scenes. Vibrant colours suffuse the romantic meetings, whilst in the court the light is harsh with all protagonists being more or less colourless ciphers. Vincent does not try to tell a story: L’Hermine is episodical and fragmented, only held together by Luchini’s personality, and it carries it well and very competently. There is a masterful dramatic tension here that leaves the audience always wanting to know more. AS