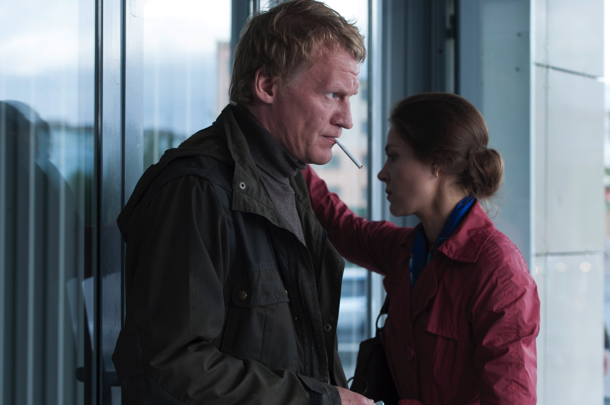 Small, large, small, large: that’s the pattern of canvas sizes on which Andrei Zvyagintsev seems to be working. The Russian filmmaker’s tight debut feature THE RETURN (2003) was followed by sprawling sophomore effort THE BANISHMENT (2007), while taut masterpiece ELENA (2011) is succeeded now by suitably named LEVIATHAN, his most ambitious work to date. Taking its inspiration from the Book of Job, Zvyagintsev and co-scriptwriter Oleg Negin’s big, bleak statement on contemporary Russia won the Best Screenplay prize at Cannes, and held a capacity audience rapt for its 141 minutes this week at the 14th edition of T-Mobile New Horizons in Wrocław, Poland.

Melding the domestic and the social, the personal and the political, LEVIATHAN tells the northwest Russia-set tale of vodka-swigging Kolya (Aleksei Serebryakov), whose beautiful inherited beachside home – shared with his younger wife Lilya (Elena Lyadova) and his son from a previous marriage Roma (Sergei Pokhodaev) – is under threat when the corrupt local mayor Vadim (Roman Madyanov) purchases the surrounding land. Kolya enlists good pal Dmitri (Vladimir Vdovichenkov), a lawyer from Moscow, who arrives in town to scare Vadim off with some canny research of his own, and to rekindle a sexual fling with Lilya.

To say any more is to ruin Zvyagintsev’s most narratively complex work to date. What makes this tremendous film so rewarding, however, is the director’s retention of previously employed ambiguities, which he puts to use in an unprecedently expansive storytelling style. As such, the Russian, who for many has been a kind of successor to Tarkovsky (claims and comparisons that appear now to be unhelpfully lazy), is pushing the boat out here into new territory not unlike how Nuri Bilge Ceylan did with ONCE UPON A TIME IN ANATOLIA – which ranks alongside Zvyagintsev’s ELENA as one of this decade’s best films.

LEVIATHAN now surely joins such ranks. Before anything else are the familiar strengths. Regular cinematographer Mikhail Krichman shoots with a reliance on the natural light of northwest Russia’s late summer/early autumn, giving the whole thing a pallet at once unhealthily under-lit and richly blue. Elena Lyadova, a less central performer in ELENA, is here elevated to key player: in her, Zvyagintsev has found an actress whose hardened beauty betrays all the hurt and disappointment that an ordinary life down on the lower rungs can bring. In so much as a glance here, she conveys a woman caught between the rock of an unhappy marriage and the unbearably hard place of a doomed affair. Philip Glass’s music also returns: ‘The Ruins’, from his 1983 opera Akhnaten, bookends proceedings over sequences of harsh, foreboding cliff faces and crashing, ominous waves.

Does the film overreach? Though such passages as that just mentioned are vivid and gripping in themselves, they do suggest a director who’s possibly too eager to imbue his work with an air of thematic significance. All the more refreshing, then, that the film is also Zvyagintsev’s funniest by far. Never settling for any one simple tonal register, it at times reaching levels of black satire, most notably in its early depictions of Vadim the mayor, a shark in a small pond whose office boasts a framed portrait of Putin, to whose shady Machiavellianism he palpably aspires (other framed leaders, from Lenin to Gorbachev, feature in another scene). As Vadim, Madyanov steals the show, resembling a fluffy teddy bear dowsed in vodka one moment and a ruthless, no-nonsense brute the next.

In a key scene, this cartoonishly disgusting villain seeks sympathy from the church – and comes away with an unspoken blessing to destroy the lives of ordinary and largely decent folk. And, on the beach not far from the domestic space eventually demolished with brutally undiscerning abandon by a bulldozer, is to be found an avatar of Russia today: the sad, giant skeleton of a beached whale. MICHAEL PATTISON

NOW ON DVD/Blu from