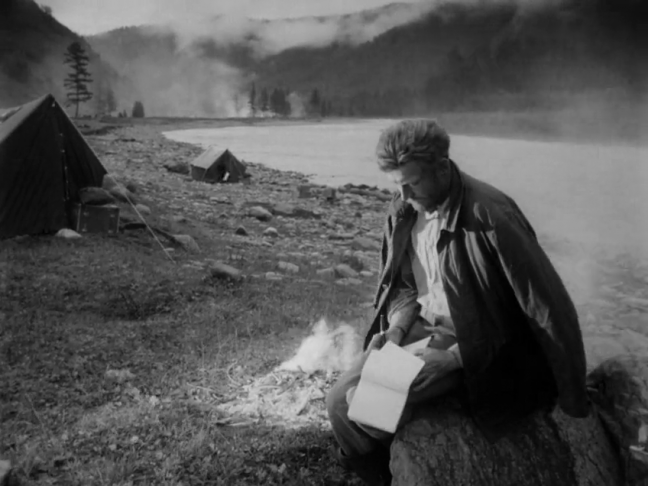 A plot summary of Letter Never Sent appears simplistic. Four geologists are sent by the government into the forests of central Siberia to look for diamonds.Initially they find little evidence, express philosophical doubts and yet strive for the best. A diamond seam is discovered. On returning with the good news they are blocked by a forest fire, lose radio contact and most of their supplies. There then follows a struggle to survive in a forbidding landscape. We share the hopes and fears of a very human and idealistic group. Sabinine
(Innokentiy Smoktunovskiy) is writing a letter home to Vera (Galina Kozhakina) that turns into a diary that is never sent. Sergei (Yevgeni Urbansky) is sexually attracted to Tanya (Tatyana Samoylova) already the girlfriend of Andrei (Vasili Livanov). She discovers a note from Sergei expressing his passionate feelings for her. 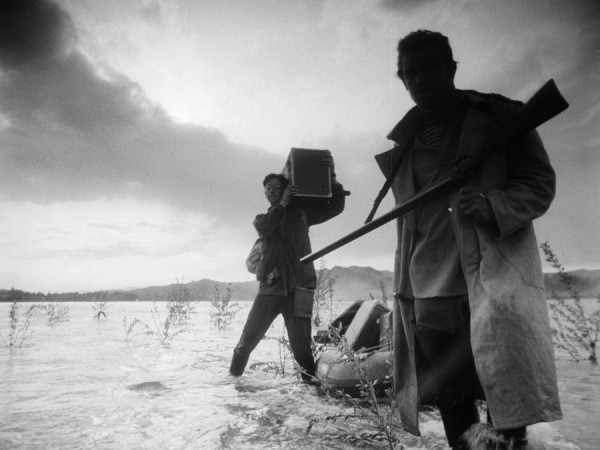 There is a remarkable sequence where Tanya and Sergei are working in a trench. Tanya is examining the earth for diamonds and Sergei is digging with pick-axe. He stops and attempts to seduce Tanya. She recoils and Sergei departs. Tanya is shaken. Yet she gradually becomes overjoyed in realising that she has discovered the diamonds.

In a rare moment for Soviet ‘50s cinema things turn intensely sensual. Andrei appears and as they both run ecstatically through the woods there is a lyrical scene that is remarkable for its pantheism. However this proves only a momentary reprieve in Letter Never Sent. Soon the geologists will confront the intense hostility of Nature. Visually the film has a poetry that few wilderness adventures can match. The black and white photography is miraculous. Superimpositions, dissolves, tracking shots and natural lighting are used to masterly effect. People are pitted against the elements of earth, fire, air and water to create a cinematic osmosis. Fire and water are filmed in a way that makes these forces appear to be real constituents of the actor’s bodies.

Where words often fail to describe these images, music succeeds in the visceral nature of Sibelius’ Finnish tone poems (especially Tapiola and Oceanides). One criticism levelled at the film is that its characters are underwritten and that Sergey Urusevsky’s brilliant photography is a triumph of form over content. I disagree. Firstly the characters are convincing and rounded enough for their conflict and primal relation with the film’s principal character – its natural environment.

Mikhail Kalatozov’s direction is powerfully understated. He gets subtle performances from his actors and, aided by Uresevsky, produces unforgettable imagery and compositions that hark back to Pudovkin (Arsenal) and also forward to Tarkovsky (especially Ivan’s Childhood released in 1962). Kalatozov also creates a subdued homage to the endeavours of the Soviet state (See Sabinine’s hallucinations of the shipyards) accompanied by a subtle critique of power (the declamatory hollowness of the authoritarian radio voice they lose contact with).

Cinema has given us many adventure stories and Kalatozov’s film has echoes of Kurosawa’s Dersu Uzala (1975) and documentaries such as Robert Flaherty’s Man of Arran. But there is nothing really like Letter Never Sent. A genuinely immersive experience of nature and a treasure of Russian cinema. @ALAN PRICE