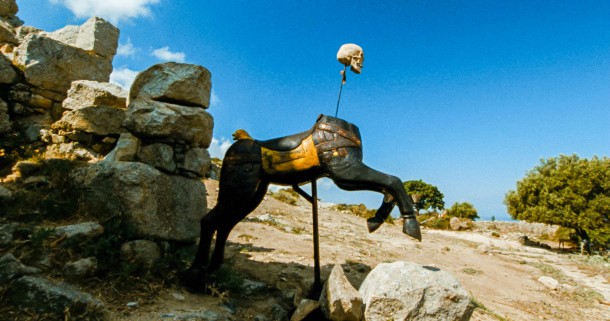 Corpses’s storyline also brings to mind a racier, more vibrant (thanks to Manu Dacosse’s vivid visuals), frenzied version of Cul de Sac with a stash of gold and shoot-outs all thrown in. Well that’s the way it starts off, at least. In craggy Corsica a raddled writer (Bernier) is lazing away his days in secluded sun-drenched splendour with his loopy lover Luce (the superb Elina Lowensohn). But their idyll is interrupted when some vague acquaintances arrive hoping to conceal their stolen booty in this remote spot. But the local cops (Herve Sogne, Dominique Troyes) are on their tail and promptly arrive on the scene before crims Rhino (Stephane Ferrara) and his gang have a chance to smooth things over. And soon Bernier’s wife (Dorylia Calmel) and son (Bamba Forzani Ndiaye) also join the impromptu party, on spec.

And once the action starts all thoughts of Cul de Sac’s intricate psychodrama and Bastid’s social commentary are literally blown away by an all out stylistic gun battle which blazes non-stop unremittingly – or so it seems – for the rest of thriller. And whilst there’s a welcome Sergio Leone style twang to the proceedings – which whips you back to the ’60s with slices of Ennio Morricone and the popular Italian singer Nico Fidenco (Su nel cielo) thrown in, the hollowness echoes after the twanging shots die out.

LET THE CORPSES TAN is fabulous fun while it lasts but sadly fades from the memory (not the eardrums) once it’s over. That said, it’s just the thing for a sizzling summer night in Locarno – or anywhere else, for that matter!. MT