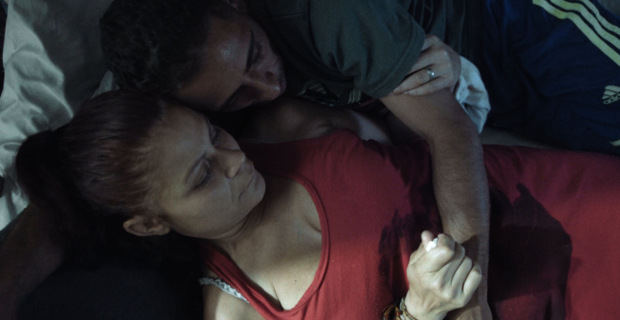 In her remarkable documentary Brazilian filmmaker Maira Bühler follows the residents of a hotel turned hostel for crack addicts trying to put their lives together again.

The original title Tell Her That She Saw Me Cry is actually much more suitable. What we are really dealing with here is a domestic drama about lost souls whose emotions are so raw that they can only be released in forceful, often self harming, ways often counterproductive to their recovery. In 28 rooms on 7 floors, 107 residents live out their grim existence in the centre of Sao Paulo. Not that we see very much of Brazil’s capital – only the noise of passing trains reminds us of the vast metropolis outside and the brutal streets where hope was decimated long ago for these hapless inhabitants in their lost ark of social abandonment. But at least a den of iniquity is preferable to the jungle outside.

A trade mark of today’s Brazilian documentary style is the obsession with detail combined with an objectivity that captures an out-pouring of emotions often frightening to witness. A man shouts into his phone, desperately declaring his love for a woman who might not even be listening – but his cri de coeur is at the same time proof of him being alive. A lonely woman in a deserted dormitory waits for a lover who might never return. The longing for company is what keeps the majority of the tenants alive. The camera searches out the human links and reveals little groups clinging on to each other for survival. An aching love song reminds us what this is all about: love, however fleeting, is vital for survival.

The social gulf between film crew and their subjects is enormous. But when the crew has installed a tripod in the lift and starts filming, one woman reveals to the director that she is completed uneducated. But even though there is an uncomfortable feeling of voyeurism, the woman never prevents the camera from intruding into her misery. The strength of the film is that it allows ambiguity to develop without letting fragility and vulnerability mask the gradual humanisation. Sadly, this last chance saloon of salvation has now been shut down as part of the cutbacks in psychiatric support instigated by President Bolsonaro’s far right government. AS