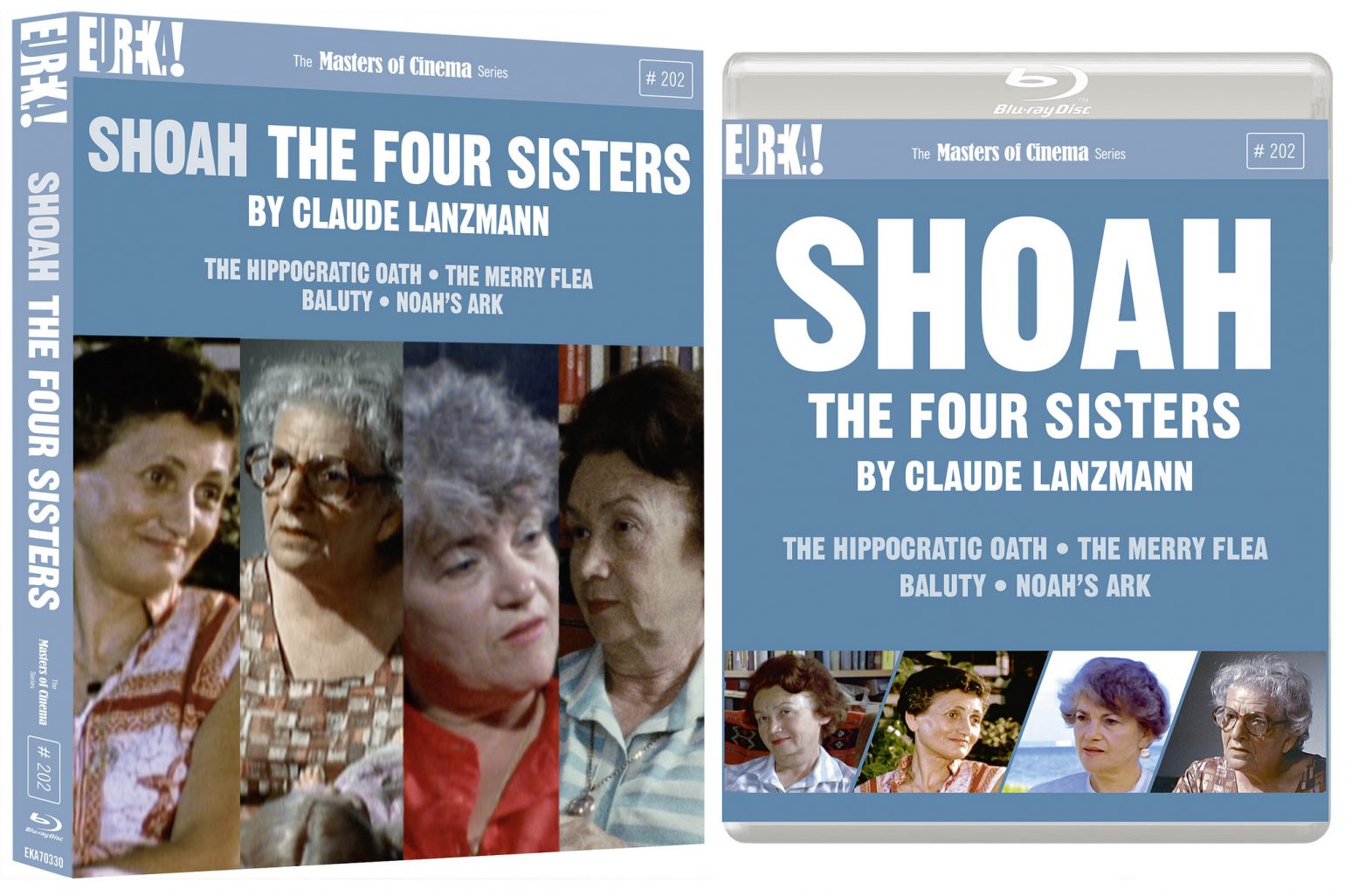 Just seven months before his death in July 2018, Claude Lanzmann’s last “satellite” feature Shoah was shown on French TV. Even though the four interviewed Holocaust survivors are not genetic siblings, they share the real burden of survival (each the last of their families), yet their stories are very different. In reality their stories of survival are stranger than fiction. Two of them, Paula Biren and Hanna Marton, are still suffering from survivor’s guilt, because, however unwillingly, they were the one who escaped the Nazi extermination machine.

Ruth Elias (1922-2008) sings Czechoslovakian songs from her childhood, accompanying herself on the accordion. These tunes helped her and her fellow sufferers to survive in Auschwitz. Now at home in Israel, her upbeat optimism somehow jars with her macabre story as she cuddles a German Shepherd, the archetypal emblem of Nazi Germany. When the Germans occupied her native city of Moravska Ostrava (Czechoslovakia) in 1939, the family lost not only their – non-kosher – sausage factory, but had to go into hiding with false papers. In April 1942 the rest of the family was deported to Auschwitz, whilst Ruth married her boyfriend and stayed behind in hiding. In Auschwitz, the genders were separated, but Ruth’s mother did not want to leave her husband, and was shot dead in front of him. Ruth’ sister Edith was also killed. And Ruth too was caught eventually, and via Terezin reached Auschwitz, where she found out she was pregnant. She miraculously survived the selection process, other inmates hiding her from Mengele. When he found out, he was furious, especially as Ruth’s friend Berta, also near term, also got away. But Mengele was vengeful: after the birth of her baby-girl, he had Ruth’ breasts bound, so that she could not suckle her offspring. Mengele wanted to find out how long a baby could survive without being fed. After nine days, an imprisoned Jewish doctor, Maza Steinberg, told Ruth that she had sworn the Hippocratic oath to save human lives – and since the baby was dying, it was her duty to save Ruth. She got hold of some morphine, and Ruth injected her baby with a lethal dose. The next day Mengele appeared and was somehow disappointed: “You are really lucky, I had planned to deport you and the child with the next transport”. Via Hamburg and Ravensbruck, she ended up back in the CSSR, totally broken, even after ‘liberation’ She was put into a sanatorium, where she finally found the will to go on living. Later in Israel, she met Dr. Steinberg with her two sons, the women stayed in contact for the rest of their lives.

Born in Galicia, Ada Lichtman then moved with her family to a village near Krakow. When the Germans invaded in 1939, they gathered the Jewish men, and shot all 134 in a nearby wood. Polish people made life hell for Ida and the other survivors, they looted their flats while the Germans looked on . Ida was captured and housed in an aerodrome where hunger and disease whittled down their numbers. Her fiancée had been shot along with the other weaker Jews, who were hit over the head with rocks. Deported to Sobibor, she soon met Gustav Franz Wagner, SS Oberscharfuhrer. Discovering Ada was a kindergarten teacher’, he said “Then you might be able to keep house for me”. The SS in Sobibor thought it amusing to christian one of the houses “The Merry Flee”, making it sound like an operetta title. In reality the whole camp was filthy. The SS enjoyed stripping all the newly-arrived prisoners, and made the oldest men dance with the youngest girls. Later, when they were drunk (ie. often), they raped the women. Ada never wanted to believe that Sobibor was a death camp but she survived, along with her husband. The Nazis made Ada mend the murdered children’s dolls so they could give them to their own kids to play with. When a convoy with Dutch prisoners arrived, they had to fill out postcards, telling their relatives that everything was fine. They would be gassed, before their postcards arrived home. Wagner, who was called ‘Wolf’, relished performing the executions. After the successful uprising in October 1943, the prisoners scattered around the area. But Sobibor was never re-opened.

This is the titular name for the Lodz Ghetto, where Paula Biren would end up as a member of the Jewish Police. She was seventeen when the Germans invaded, and had helped to dig ditches to stop German tanks. Paula listened to Hitler’s radio reports so she was aware of what would happen to the Jews After the invasion, Polish people would beat up Jews. In October 1939 the Germans started to build the Jewish Ghetto, in the poorest quarter of the city. 200 000 Jews would end up there overseen by Germans and the (Jewish) Judenrat, led by Mordechai Rumkowski, who turned the ghetto into a slave labour camp on behalf of the Germans: 45 000 Jews died of starvation and disease. He and his closest colleges were all deported to Auschwitz. After they lost their flat, Paula’s family moved into the ghetto, it “felt like going to prison”. The Judenrat had once been a Jewish welfare organisation, but now it was a parody of the Jewish state. In 1942 the first transports went to the death camps in Auschwitz and Chelmno. Paula and her family started a vegetable garden, and hopes were high. But she was soon commandeered to join the Jewish Police, initially working in the office, but later on her night patrols. Beggars and ‘loiterers’ were given a warning, and they would be deported to the death camps. Paula managed to hide but her family was deported to Auschwitz and killed. When the ghetto was finally liquidated in August  1944, Rumkowski made a list of people who would go to a special camp.  Nobody believed him any more. “I was finally put on a train to Terezin, which was not a death camp – if I’d stayed put, I would have been killed like my family”. After liberation, the Polish people in Lodz told her to leave –pogroms started up again. Living in the USA, Paula refuses to answer Lanzmann when he asks if she thought Rumkowski was guilty. “I leave this to others”.

Paula Morton had just has lost her husband, also a survivor of Hungarian death camps, when Lanzmann interviewed her in her home in Tel-Aviv. She grew up in Cluj ( also know as Klausenburg) a Romanian/Hungarian city of over 15000 Jews lived. Hungary had send 60 000 Jews to the front in WWII, to fight alongside Germans and Italians in Russia. The Jews had no rifles or other weapons, they were used as slave labour. Only 5000 survived; Paula’s brother was one of the victims. Until 1944 Jews were left alone, then the deportations started. Paula is rather scathing about her fellow Jews: “I kew if Hungarian Jews are asked to come at 12.00 for their execution, they would all appear on time”. Paula and her husband, a lawyer, had been in the Zionist Youth organisation in Hungary, and later got to know Zionist leaders like Dr. Fischer, Dr. Kastner and Hillel Danzig. These three had ties to the SS, and particularly to Eichmann. They agreed that 1684 Jews would be exchanged for huge sums of money (the SS always put the price up, and even when the Jews arrived in Switzerland, huge sums changed hands.). An estimated 500000 RM was being shelled out by the Zionist organisation. Paula and her husband were deported to the Kistarcsa transit camp near Budapest. Between the 10th and 30th June 1944 all Jews from the camp were deported to Auschwitz, just the 1684, mostly Zionist and/or wealthy remained. The group was supposed to travel to Auspitz (!), but the Hungarian authorities wanted them to go to Auschwitz. Kastner intervened along Eichmann, and the transport left Hungary. But before the convoy reached the Swiss border, two families had to leave, and because they were not Hungarian, they were deported to a death camp. Paula is obviously guilty about her survival, but she claims to Lanzmann that her husband was a fatalist and felt no guilt at all. She told him, “it was beyond a personal choice. What people forget is that the Nazi terror produced the situation. They alone decided in the end, who lived and who died. Some will say, if you can save one thousand and let 10 000 die, do it. Others will say, all should die”. Dr. Kastner was later killed in 1957 Israel after being found guilty of collaborating with the Nazis. A later court cleared him posthumously.AS