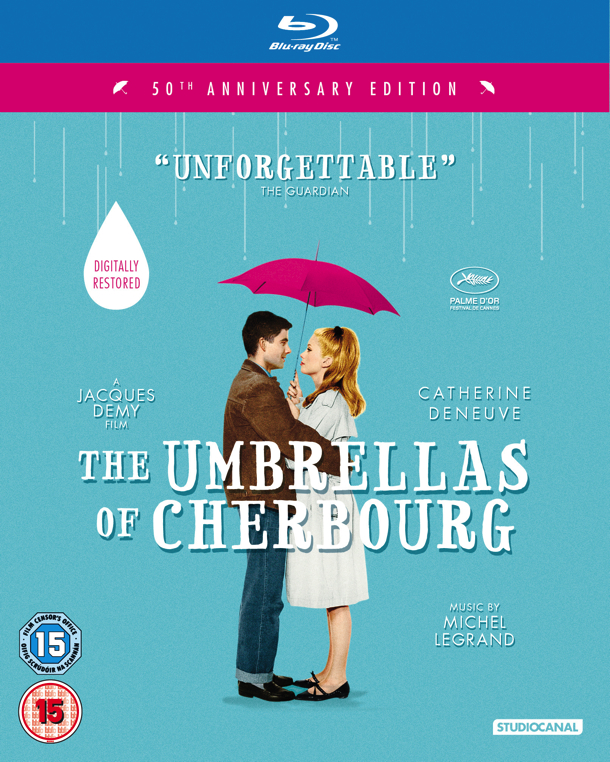 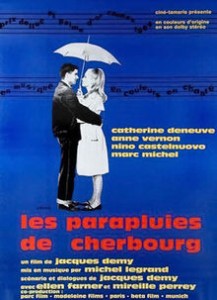 LES PARAPLUIES DE CHERBOURG, a musical which won the Palme D’Or’ in Cannes 1964, is the middle part of a loosely connected fantasy trilogy by Jacques Demy (1931-1990); bookended by Lola (1961) and Les Demoiselles de Rochefort (1967). The latter two starred the young Catherine Deneuve, who Demy made into a star. LES PARAPLUIES is set in Nantes, Demy’s hometown. It relies very much on architecture and interiors, Demy even had part of the town repainted, so it would fit in with his colour scheme. The narrative is simple: The young Genevieve Emery (Deneuve) is madly in love with Guy (Nino Castalnuevo), an auto mechanic. Her mother (Anne Vernon) is vey much against this match, since she has long ‘decided’ that her daughter should marry the well off jeweller Roland Cassard (Marc Michel). Fate takes a hand when Guy is called up to serve in the Algerian war. Just before he leaves, the couple consummate their relationship, pledging eternal love. But the one night stand is enough to make Genevieve pregnant, and her mother successfully intercepts and destroys all letters Guy sends from the front. In the end, Madame Emery gets her way: Genevieve, pregnant, gets married to Monsieur Cassard. And when she meets Guy by chance three years later, there is only embarrassed silence. 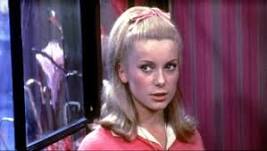 LES PARAPLUIES was seen as the French answer to ‘Mary Poppins’ – obviously we get a love instead of a kiddies classic . But the aesthetics are similar: a sort of pre-pop escapism, with a colour scheme to match. Everything is over the top, the singing and design scream loudly of a world widely removed from any reality. Together with Legrand’s magical music score Demy delivers the viewer into a fairy-land – but no happy Hollywood ending. Bittersweet and with radical changing emotions, PARAPLUIES is a very French escapade.

Jacques Demy was a contemporary of all the Nouvelle Vague crew, and he started his career at about the same time. But unlike them, he did not wanted to break with tradition, his films are in the tradition of the pre-war films of Prevert, Max Ophuls and Renoir. Demy wanted to relieve the viewer of the pressure of reality, not confront them with it like Jean-Luc Godard. Most of his films are set in Nantes, he relies heavily on this background. But it is anything but realistic, Demy re-creates a contained fantasy world. Playful and always relying very much on the central performances as in PARAPLUIES, he created an alternative universe, in which reality goes under in waves of colour, music and melodramatic emotion. AS