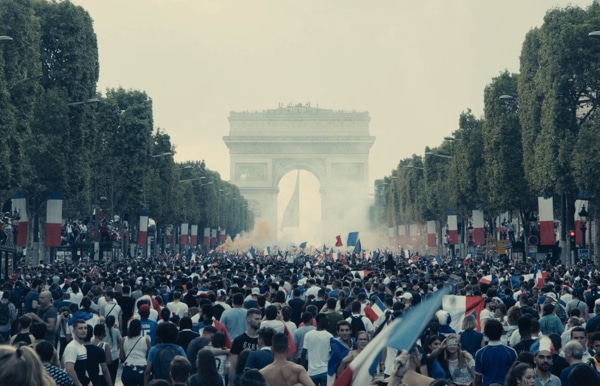 Nobody is a winner in this incendiary urban thriller that turns on a good cop bad cop premise as violence erupts in the multicultural melting pot that is Les Bosquets in the backstreets of Montfermeil to the east of Paris.

As the title suggests these are grim times. First time director Ladj Ly, who has himself had a brush with the law knows, the territory well. His high octane movie opens with an ecstatically joyful pre-credit sequence and builds to a cataclysmic crescendo that will leave you deflated and down in the dumps at the depravity and disillusionment of our times, admittedly no worse that those of Victor Hugo whose 1862 novel Les Miserables captured a similar time in the early part of the 19th century when the June Rebellion caused violence in the French capital. We are left with the realisation that are no answers. And that makes this a depressing watch.

The film kicks off in jocular mood as two hard-nosed local cops Chris (Alexis Manenti, who co-wrote the script) and Gwada (Djibriare Zonga) shoot the breeze with their new colleague from the provinces Stéphane (Damien Bonnard), and their boss (Jeanne Balibar in witty form). But soon the fraught intricacies of this urban terroir are exposed, along with the ethnic divisions governed by the key figures in a locale where policing has become just another dirty word on the streets. Chris has linked in with his own strategic network, a local, nicknamed “The Mayor” (Steve Tientcheu), who acts as a police go-between. Another ‘neutral’ authority figure is Salah (Almamy Kanouté), a reformed jihadi who has been busy converting people to Islam.

The action is sparked off by Issa (playing himself) a young tearaway who has stolen a lion cub from a gypsy travelling circus. The cop trio must cruise the streets and gather ‘intel’ from their informants in order to recover the animal. But the situation soon escalates after the police are ambushed as they chase their suspect through the playing fields, one of them ‘accidentally’ firing a ‘flashball gun’ that injures Issa. What’s worse is that the incident is being filmed by a drone, spelling disaster for Chris and his colleagues.

Amid the simmering violent ambience, Stéphane soon emerges as the ‘good cop’ and is determined to hold his colleagues to task: they often resort to what they consider ‘necessary’ tactics, and there are times when you actually root for them given the complexities of the task at hand in this understandably lawless environment. The paucity of influential female characters makes this a very macho affair which works best in the scenes where livid anger, resentment and retribution sizzle below the surface. The mayhem that erupts in the finale – though cathartic for Ly himself – feels overblown, destabilising the subtle human stories at the tragedy’s core that are worthy of a more thorough and satisfying exploration. But Ly opts for full-on mayhem and melodrama. And these brilliantly executed crowd-pleasing moments will have appeal for those who identify with the young reprobate Issa. Les Miserables is France’s entry to next year’s Academy Awards. MT