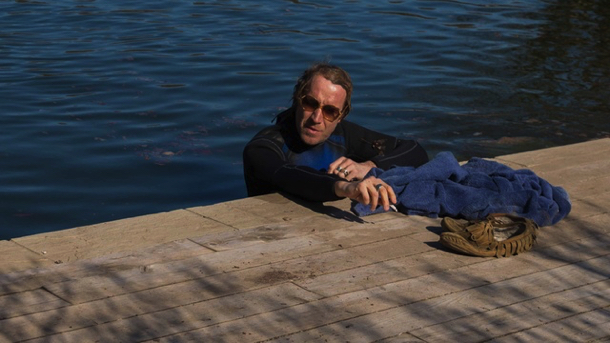 Montreal-born Tom Godsall brings together a veteran and a newcomer by way of a rising star in his debut feature LEN AND COMPANY, in which Rhys Ifans plays crabby superstar music producer Len, who wearily retreats to his country home in Upstate New York followed by his aspiring and retiring rockstar son Max (Jack Kilmer) and his newest award-winning collaborator Zoe (Juno Temple). Commendable primarily for allowing a limited performer like Ifans to play to his strengths, this curious and mostly understated drama world-premieres at the 69th Edinburgh International Film Festival.

From the moment we first set eyes on Len, whose comical grouchiness offsets the otherwise cheery tempo of Ian Dury’s ‘Hit Me With Your Rhythm Stick,’ we infer the story to come: stubbornly irritable old hand retires for some peace and quiet, only for the weak foundations of his idyll to be uprooted by unwelcome if belatedly appreciated visitors. If the particulars aren’t entirely precise, the general gist is there: it’s not long before Len’s son Max shows up, complete with inoffensively bland hairdo and a secret desire to have his dad listen to a new demo he’s made with some pals. Max finds it difficult to connect with his dad; the latter even responds to the mention of a Liverpool football match with a curt dismissal. It’s only when Zoe, the outwardly feisty but vulnerable popstar with whom Len has just made a hit record, also shows up that Len’s paternal and professional laziness are finally confronted.

For the most part (though it has its pitfalls, the most risible of which involves a final act visit from one of Zoe’s admirers) Godsall’s script, co-written with Katharine Knight, unfolds by way of casual segues rather than dramatic standoffs—unexpectedly so, perhaps, given the director’s success making TV commercials. André Pienaar’s consistently unshowy autumnal cinematography, meanwhile, helps to further subdue any would-be melodrama. The emphasis here is more on those unspoken wishes, the ones that gnaw away from within. Whatever kind of resolution is on the cards, here, it’s to be embodied by Ifans’s trademark raised eyebrow—and little more.

It’s a giant in-joke by now that any film character would find Ifans remotely appealing, and details about Len’s own artistic success here are suitably scant. Worn out by his own lifestyle and barely ready to admit to anything resembling regrets, Len prefers to sit around watching old episodes of The Sweeney and Blackadder on DVD. Likewise, Ifans keeps things relatively low-key, delivering lines like “she was an underfed coyote, poor thing” and “cheeky fucking cunt bastard” with a functional rather than expressive register. It’s a clever casting choice, all told: opposite Kilmer (Val’s son) and Temple, Ifans cuts an effectively exhausted figure, as much bemused as anyone by his own longevity. MICHAEL PATTISON