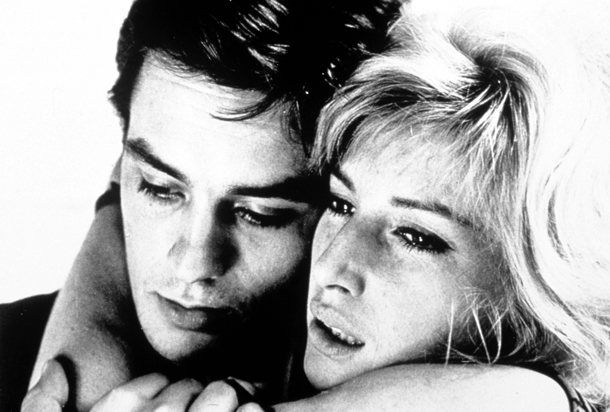 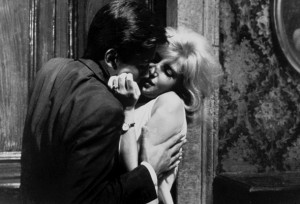 After L’Avventura (1960) and La Notte (1961) Antonioni finished his ‘trilogy of alienation’ with L’Eclisse. Another story of doomed love, Vittoria (Vitti) leaves her long-term writer lover Riccardo (Rabal) after a night of soul-bearing and when L’Eclisse starts in the morning, it feels somehow like a continuation of La Notte.

But before Vittoria ends her relationship with Riccardo, she arranges a new Stilleben behind an empty picture frame. The break-up is not traumatic, Vittoria cowers on the sofa like a mourning child, Riccardo cannot get through her passive-aggressive attitude with his arguments. Vittoria seems to pay for the break-up with a life in silence, words or sounds do not reach her anymore. The freedom she has achieved turns out to be alienation. Rome is hot, and Vittoria wanders without focus through the city, only following a man for a short while: he has lost a fortune at the stock market, and draws an endless array of little flowers on a slip of paper. Antonioni shows the transition of Italy in the architecture of its capital. The EUR quarter, with will later be the business centre, was originally planned by Mussolini, to celebrate twenty years of fascism in 1942. Wide boulevards and austere buildings give an idea how the city would have looked if the Axis would have won the war. Now Rome is one big building side: the old and the new fighting for supremacy. Vittoria, searching for her neighbour’s dog is lost in a city, also losing its own identity.

She visits her mother (Brignone), who is playing the stock market, always ready to “play” big – later she will loose a million Lira. Mother and daughter have not much to say to each other, Vittoria seems to be condemned to a lonely, silent life. At the stock exchange she meets Piero (Delon), but is not impressed by him at all. Later, they run into each other again by accident, starting an affair, which is very unsatisfactory for Vittoria: ”I wish I could love you more or not at all”. But Piero, who spends his life in the fast lane, is not a loveable character at all: when his car is stolen and later turns up in a river with the thief trapped dead behind the wheel, he is only concerned about the dents.

Piero belongs to the future: “One can love, without knowing much about each other”. But Vittoria somehow comes alive, her isolation seems to be over. The lovers arrange a rendezvous, but their hearts are not in it. Clearly Piero is married to his work and Vittoria needs more: the camera lingers over the place of their tentative meeting, before a nuclear-style eclipse of the title, brings the film to a close. Vittoria seems to be set free by a cosmic storm: as her urban confines: door frames, scaffoldings and shop grilles, are replaced by trees.

Monica Vitti’s Vittoria is like Wenders Alice in the City: a child in a world of adults, repelled by their emotional coldness. Delon is all actions and superficiality, his friend’s remark “long live the façade” sums it all up. DOP Gianni De Venanzo’s long panorama shots show very little empathy with the eternal city, particularly the shots in silence which seem to evoke a ghost town populated by little worker ants, dwarfed by the huge buildings. Giovanni Fusco’s score kicks in towards the second half and with the voice of Italian superstar Mina. After the tremendous closing sequence, L’Eclisse will lead without much transition to Deserto Rosso (1963/4), where Vitti as Guiliana wanders the streets, getting lost again in a fog on a very unearthly planet. AS