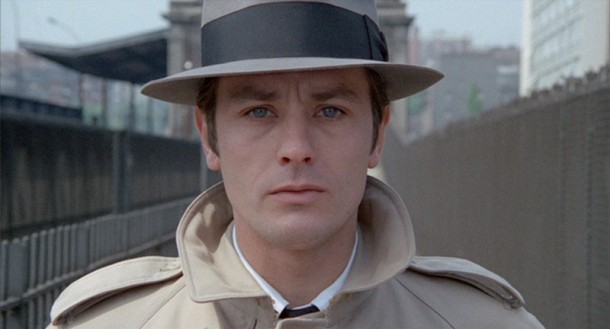 Le Samourai is a crime thriller all about loneliness. Dialogue is minimal, and even Francois de Robaix’s melancholic score is seldom used. Cinematographer Henri Decae – who had helped Truffaut (Les Quatre Cents Coups) and Chabrol (Les Cousins) on their way – photographs Alain Delon’s hapless contract killer Jeff Costello in his little claustrophobic flat, and he is only free  in his criminal underground where he is chased by the cops through the Paris metro.

When Costello assassinates a night-club owner, he makes a fatal mistake in not also killing the only witness who clearly saw him: La pianiste (Cathy Rosier). This ‘error’ will be his Achilles heel. Costello then sets up a game of chess, in which he is sure to lose, in spite of his brilliant moves. Le commisaire (Perrier) knows Costello’s guilt, but cannot break his well-constructed alibi: Janet Legrange (N. Delon), an upper class call girl is in love with Costello, but he is too sad to feel anything. She lies to the police, in spite rough-handling. The hunt in the metro is the centre peace of Le Samurai: Costello’s footwork and his knowledge of the smallest details, outwits the technology and manpower of the police. The endgame – in the nightclub of the original kill – is a cat and mouse game, which Costello has set up to save the innocent.

Based on the un-credited novel by Joan McLeod and co-written by Melville, Costello’s only friend is a canary, like his master in a cage. His counterpart, Le commisaire, is only marginally more full of joy de vivre: he has spent too many hours behind his desk, sending his men off on goose chases like a load of toys soldiers. He is a saner version of Ahab, but instead of madness there is too much resignation to make him a proper bloodhound. His bluster is a front, he looks forward to retirement, as much as Jeff looks forward to death. Janet is not much better off: she wants Costello for herself, but even sharing him doesn’t bring her happiness. Rosier’s pianist is a walking enigma: she is perhaps engaged in the sordid killing of her boss, tries to stay neutral, but her big eyes only reflect the hurt and self-hurt, she also sees in Costello. A rather gloomy Paris of the sixties is the proper background to this noirish tale, where all is lost before it begins, and all participants are like caged animals prowling around to end it.