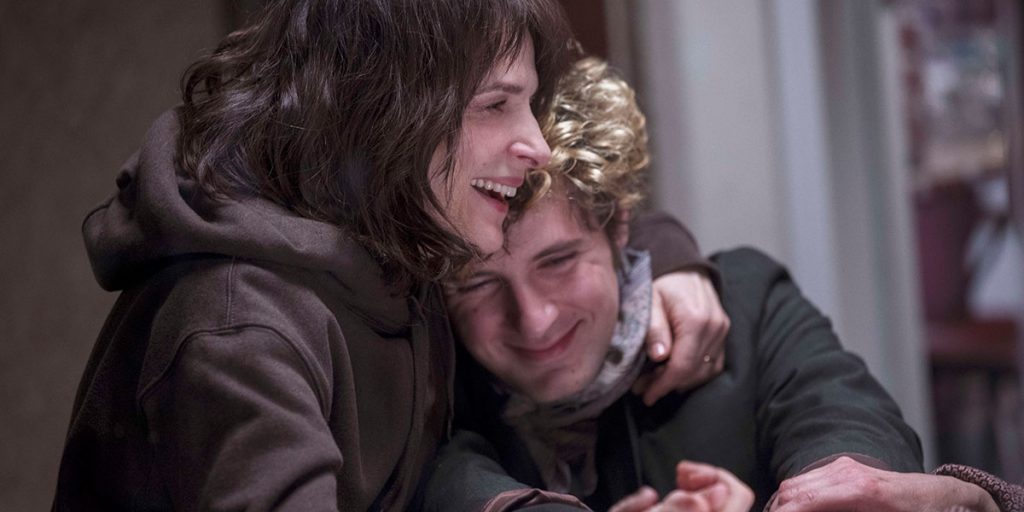 Juliette Binoche stars alongside Christophe Honore, who writes, directs and appears briefly in this tender stream of consciousness confessional that explores their teenage son’s tentative sexual awakening in a wintery Chambery on the foothills of Mont Blanc.

Told from the perspective of Lucas (Kircher) a breezy, upbeat opening scene sees father (Honore) and son motoring along a country road only to find themselves careening into the middle of a field, narrowly involved in a collision with another vehicle. And this near accident sets the febrile tone for the tragedy that will follow as the whole family implodes into anguish in facing a very different future to the one they all had in mind.

Always wearing its heart on its stylish sleeve in a beautifully nuanced way Honore’s emotionally honest film is at times difficult to watch as the heartbroken Lucas suffers an extreme reaction to his loss. But this also seems to crystallise his decision to start a sexual relationship with his friend Oscar, and a night of passionate lovemaking follows before Lucas leaves for a week in Paris with his artist brother Quentin (Lacoste), who shares a swanky flat with Lilio.

Paris is a new and radical world for the provincial teenager and Lucas is caught up in the excitement of discovery, but is also very much in awe of his brother who is busy preparing for his first exhibition. Using the city as a playground to flex his muscles in newfound sexual freedom, Lucas is also surprised to discover his puppyish unbridled appeal is much in demand with older and more sophisticated men. And this naivety does not always go down well with Lilio and certainly not with Quentin who sends him packing back to his mother after he oversteps the mark, complaining Lucas’ unbridled behaviour is disrespectful at a time of family grief. Everything comes together in a graceful denouement that sees Isabelle and her family finally seeing a light at the end of their tunnel of grief. MT