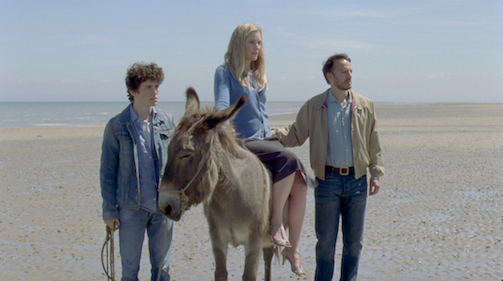 Eugene Green, the American born director continues to explore themes of creativity, family connection and the nature of fatherhood in his latest drama, his most delightful and effective since the Portuguese Nun.

Vincent (newcomer Victor Ezenfils) lives with his loving mother Marie (Natcha Regnier) in Paris, but still feels troubled and let down. Determined to find his father, he sets in a voyage of discovery that the director tackles through a series of five parables relating to the Holy Family entitled: The Sacrifice of Abraham; The Golden Calf;  The Sacrifice of Isaac; The Carpenter and The Flight into Egypt.

Made on a low budget, yet none the worse for it, this satirical drama follows Green’s usual mannered style: the characters talk in perfect diction directly to the camera as if reciting their lines from a book, often moving slowly away from the camera. Cinematographer Raphael O’Byrne’s uses a static arthouse two-shot technique but also captures the beauty of the Parisian skylines and the lush landscapes of the Normandy countryside.

Vincent finally manages to track down his father through a change meeting at a party. Oscar Pormenor (a snarling Mathieu Amalric) is a successful publisher with a wife, three kids and a mistress who also runs his affairs in a small hotel in Paris. Oscar is odious and arrogant; entirely uninterested in his family who he regards with disdain. Copying the front door key to his father’s office, Vincent manages to eavesdrop on Oscar and decides very quickly that this is a man he has no wish to be his father, or any other relation. While hiding under his couch, while Oscar is in flagrante with his secretary, Vincent also discovers that he has an uncle Joseph, and contrives a meeting with him in a nearby bar, where they chat and get on admirably.

Vincent’s hatred of his father grows so vehement that one day he decides to attack him in his office and handcuff him to his chair in exactly the same position as that of his print of Caravaggio’s painting ‘The Sacrifice of Isaac’, which hangs in his bedroom in the flat. Running away, before revealing his identity to Oscar.

Vincent and Joseph (La Sapienza star Fabrizio Rongione), become close as they visit museums and parks in the vicinity. In the Louvre, Vincent admires Philippe de Champaigne’s The Dead Christ and Joseph the Carpenter by Georges de la Tour, and the title of the film becomes clear when Vincent happens to mention that Joseph was not Jesus’ real father but became his father by looking after him.

When Vincent asks Joseph for dinner, the biblical link falls into place in a light-hearted way, without becoming too serious or religious. The humour lies in this constant juxtaposition of the religious and secular elements, always feeling fresh and light-hearted and thoroughly amusing.

The final act takes the trio to Normandy where they visit Joseph’s family home where Oscar is unexpectedly hosting a reception and calls the police when he suspects gatecrashers upstairs in the property.  Religious associations aside, the ensuing beach caper involves the police and a donkey and will go down well with arthouse and mainstream audiences alike with its infectious feelgood appeal. MT