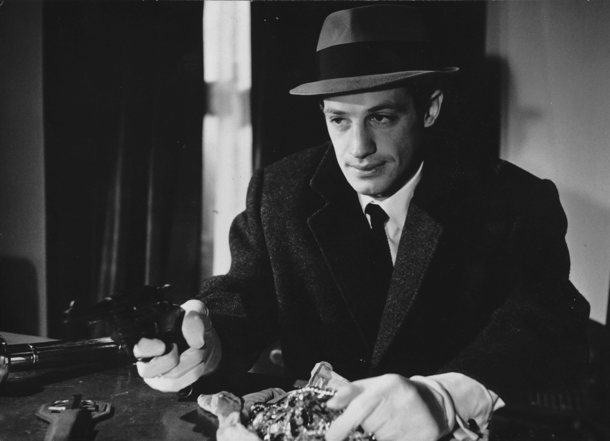 Jean-Pierre Melville (1917-1973) is known mostly for his stylish portraits of the Paris underworld, but he is also considered the ‘grandfather’ of the Nouvelle Vague; though his early friendship with Jean-Luc Godard (he had a role in A bout a souffle), ended in the late 1960s, when Godard started doing away with narratives. For Melville, a great lover of literature, this was sacrilege. LE DOULOS, based on a novel by Pierre Lesou, is an intricate work of continuous betrayal, very much like a Balzac or Flaubert classic.

The title is a French slang word for hat, but also informer, and the film opens with a brilliant long panning shot of Maurice (Reggiani), walking through an endless number of railway arches at night. Everything is desolate, including Gilbert’s dilapidated house. But we soon learn the reason for this atmosphere of doom and gloom: Maurice, just out of prison, is going to kill Gilbert for the murder of his wife. He also steals a lot of money and the jewellery from a recent heist, burying both under a lamppost nearby. A radical change of scenes follows, with Maurice planning a robbery in a wealthy Parisian suburb. He meets his friends Silien (Belmondo) in his chic but tasteless appartment where he lives with his girlfriend Therese (Hennessy). These two have something in common which will decide the fate of all concerned. The robbery goes wrong, when the police arrive on the scene, Maurice is wounded, his partner and a police detective dead. The gangsters here – like Melville himself – are very much in love with their American counterparts: drinking Bourbon in American style bars. While Silien is being interrogated by detectives led by Superintendent Clain (Desailly) in a magnificent continuous shot lasting nearly ten minutes, Therese’s body is found in car which has fallen into a steep ravine in a quarry. In a payback for the murder of Gilbert Silien kills Armand (De Leon), the lover of his ex-grill friend Fabienne (Dali), and his partner Nuttheccio (Piccoli). He also frames them for the murder when he deposits the money and the jewells in Armand’s safe. In the finale, a variation on a Cornel Woolrich theme of ‘race against time’, Maurice puts a contract on Silien’s head, before trying to stop the contract killer.

While Melville always insisted that all his films were really Westerns, LE DOULOS is typically French, starting with a glimpse of poetic realism when Maurice walks towards Gilbert’s house. What follows is very much Flaubert territory, with the protagonists trying to extricate themselves from the roles they have played all their lives, only to trap themselves in the schemes they set up. It really doesn’t matter who is on whose side, the execution of violence overrides all motives and intentions. Talking about violence, women are treated as second class citizens always at the beck and call of men, they are neglected at best. But whilst women, like in most Melville features, are marginal figures in the plot, men are romanticised to no end: they can only be victims or perpetrators.

DoP Nicholas Hayer, who worked for Melville on Two Men in Manhattan (1959), creates a black and white landscape of utter forlornness. Every room seems to be a trap: Maurice murdering ‘the fence’ in the shabby room with the victim’s own revolver, Therese left alone in her flat to be kidnapped and murdered, Silien in the police’ interrogation room, bargaining for his freedom, and finally in his own house, with the contract killer hiding behind a screen. As for Melville, there are shades of Le Samourai (1967) here, but his misogyny is much more striking in the earlier feature, spoiling it to a certain degree. AS