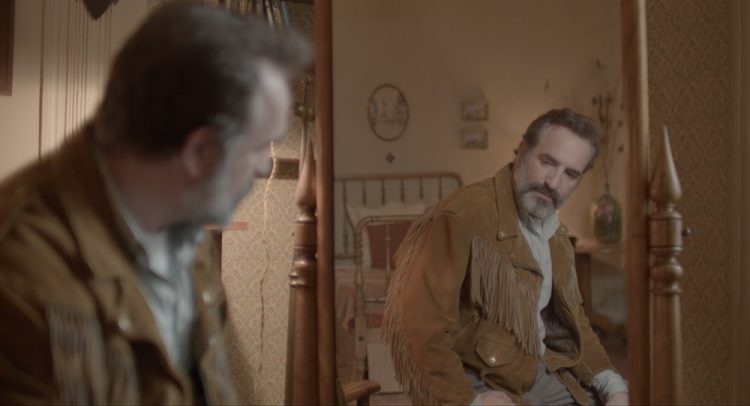 The apparel doth oft proclaim the man, says Polonius and the apparel in Quentin Dupieux’s new film Deerskin doth certainly proclaim Jean Dujardin’s Georges pretty oft.  We first meet Georges in that typical midnight-of-the-soul location: a motorway service station. He is feeling a sudden contempt for his corduroy jacket, trying to stuff it down the toilet. Apparently in the immediate aftermath of a marital breakdown, Georges splurges a huge sum on a second hand 100% deerskin jacket with tassels. Not since Daniel Day-Lewis in Phantom Thread has a man been so taken with a sartorial item. Georges’ new jacket is tight for him and weird, and yet he’s so excited about being the height of what he calls “killer style”.

Holing up in a remote mountain hotel, Georges starts to film his jacket with a camcorder (thrown in as part of the jacket deal) and hold conversations with the garment with Dujardin doing both voices. On one level, Georges seems like a pitiable middle-aged man in the midst of a crisis: his bank account is frozen; his wife tells him he no longer exists and he even resorts to eating out of a bin. And yet Georges is armoured by his own delusions which quickly turn psychotic. Befriending a local bartender Denise (the ubiquitous Adêle Haenel), he convinces her he is making a film, which gels with her own ambition to be an editor. But the filmmaking pose is only a way toward securing his more ambitious goal – a dream he vocally shares with his jacket – of eliminating all other jackets; and therefore all other jacket wearers.

It is testament to Dupieux’s skill and the utter commitment of his two leads that Georges madness somehow feels grounded in an ordinary world. And yet it’s a world of ordinary madness. There are no police around and no consequences to the violence, even though Georges doesn’t seem to be hiding the bodies. In fact, he’s filming the killings and Denise is onboard, enthused enough by the footage to start financing the movie herself. Albeit occasionally dense – he doesn’t seem to understand computers – Georges has a fiendish talent for improvisation and the same could be said of the film. Its twists and turns, its toying with expectation, keep the shuttlecock of lunacy airborne long enough for Georges to get himself kitted out with more deerskin products and the movie to turn in some hilarious moments of violence.

Although more recently seen as a straight dramatic actor Haenel has proven comedy chops and she makes Denise both a credible foil and accomplice to Georges. But the power of the movie comes with Dujardin’s performance, which is detailed and astute, comic and unnerving. Dujardin shows Georges to be a vain preening man – he asks women in a bar if they were talking about his jacket – who demands attention and insecurely needs to be the boss. It’s like he’s playing American Psycho via David Brent.

The film is a portrait of toxic masculinity weirdly stripped of its most common denominator: misogyny. Georges doesn’t care for anyone except himself and his jacket. Deerskin is a reductio ad absurdum of male obsession and vanity and it is all done in “Killer Style”.  John Bleasdale